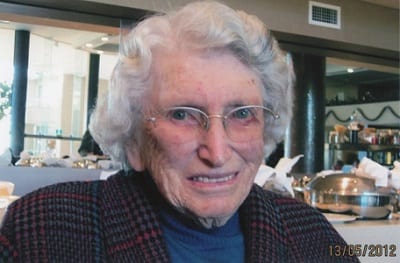 Marj Gillis, one of the oldest and longest residents of Arcadia and Galston area passed away on 28 March 2019, aged 95. She came to live in Arcadia in 1933.

Joseph Gillis and Elsie Codling were married in Cambridge New Zealand on 9th December 1914. Joseph, who called himself ‘a seedless raisin’ found that he could not have children, so when Elsie’s best friend, Bell Turner knew of a young girl of 19 that was having a baby, she arranged for Elsie and Joseph to adopt the baby and they named her Marjorie Shirley Gillis.

Miss Ruby Sarah Caroline Eastwell gave birth to Marjorie on 6 August 1923 at Frankton Junction, the main railway junction at Hamilton New Zealand. Marj never met or had contact with her birth mother who passed away in 1983.

When Marj was 10 years old the family moved from New Zealand to Australia, arriving on 20 April 1933. At first they lived at Grandfather Gillis’ property at 37 Cobah Road Arcadia that consisted of 10 acres. There was the original slab constructed house and another little old house on the property. Several Gillis families lived there – Edward Moore Gillis, Edward & Anne Gillis family, Joseph, Elsie & Marj and some others. They heated water in a large round metal tub over the fire on Friday afternoon for their weekly bath. There was no electricity or running water. Once a week they would go to the creek behind their property and do the washing of their clothes in the creek that was about half a kilometer from the house.

After some time, Arthur Geelan moved one of the houses to an isolated spot near the end of Bloodwood Road, Arcadia for Joe, Elsie and Marj to live in. Here Joe grew passion fruit, pumpkins and other vegetables for a living.

Marj attended the local primary school at Arcadia for 2 years where she completed her formal education. Her father Joseph and his brothers and sisters had been a founding members of the Arcadia primary School in 1898

Marj learnt to play the piano and organ and studied at the Sydney Conservatorium Of Music, gaining her A mus A. This allowed her to teach music in the local community. She became the organist at the Arcadia Adventist Church when she was a teenager, pushing the pedals and tickling the ivories on the old pedal organ and then later the electronic organ, for 66 years until she was 80 years old.

Ronald Gillis took a liking to his adopted first cousin and would often ride his pushbike along the sandy bush track from his home in Peebles Road Arcadia to visit Marj. The moonlit nights must have got the better of them, as they were married in the Arcadia Adventist Church on 5 January 1944.

About this time Joe purchased a 5 acre property and they moved the little house again from Bloodwood Road to the new property at 17 Cobah Road where they lived for the rest of their lives. Ron and Marj purchased the adjoining rear 5 acre property, built a shed and lived in that for a while. Then with the help again of Arthur Geelan they built a two bedroom fibro house and filled it with all the modern conveniences such as a cold water tap that supplied water from the tank, a wood fuel stove, a chip heater to warm water for the bath, a copper to boil water in to wash the clothes, a scrubbing board to help get the dirt out of the clothes, twin concrete laundry tubs and a wringer to get most of the water out of the clothes, and a bucket dunney about 25 metres away from the house. Here they established a poultry farm with sheds constructed with bush poles and flattened 44 gallon tar drums and an orchard. They had Sam, the draft horse, to cultivate the ground. Marj worked with Ron on the farm when she could and played some social tennis.

Eighteen months after their marriage, a baby girl appeared and they named her Lornabelle an then another 18 months later a son, Glenn.

Looking after the two children and her invalid mother took much of Marj’s time, but she still had a large vegetable garden, worked on the farm and had an egg run, delivering eggs to all the shops in Hornsby.

When Lornabelle and Glenn had grown up, Marj took a real job and worked at ‘The San’ as receptionist in the Nurses Residence, where she brought home a pay packet for the first time in her life.

Being brought up in hard times and living through the great economic depression gave Marj a hard work ethic. Even in retirement she took in ironing and usually had 8-12 families that brought their clothes to her to be ironed. This gave her good contact with people and she continued to iron for them until she broke her hip at 88.

Marj was a resident in the Arcadia and Galston district for almost 80 of her 95 years and it is unlikely that there is anyone living that has been part of this community for this long. This was home for her and where she loved to be.

She was always happy and positive, often set in her ways, particularly when older. She was contented with the simple things in life and her faith in God.

Thank you to all who have been part of Marj’s life and been called her friend.