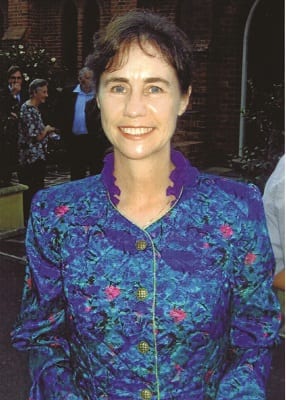 Lee Nona Gwenyth Evans was born on 7 May 1962, the second of four children and only daughter of Allan and Nona Evans. She attended Hillside Primary School, Galston High School and, after a gap year, Hawkesbury Agricultural College where she graduated with a Batchelor of Applied Science (Agriculture) in 1984.

Lee had three distinct phases to her working life. The first was in journalism. After graduating Lee joined Rural Press, quickly becoming editor of “Hobby Farmer” magazine. She left this position in 1988 in order to travel extensively in Europe.

On her return she was employed by Don Burke, was rapidly rising with the launch of Burke’s Backyard on Channel 9. Lee was a researcher for the television show and wrote and edited Don’s annual Almanac for the lazy gardener.

At the same Lee was developing and expanding her talents and interests in the creative arts and as a farmer and nurseryman. Her painting became focussed on exquisitely rendered images from nature with plants, birds insects – particularly butterflies – as recurring themes. For a she kept a small flock of sheep and spun their wool. She worked with our father in breeding a wide range of poultry and cultivating daphne.

In 2011 Lee’s outside interests and her working life finally came into alignment. She took redundancy from Macquarie University and plunged into the third phase of her working life as a self-employed entrepreneur. Lee launched her business “Feather Flower Brush” in order to market her poultry, artworks, hence the name.

Striking out on one’s own has risks but Lee embraced the challenges and quietly in the triumphs. She built her business on strong ethical and sustainable principles and the rewards were starting to show. In particular, Lee and our father had become known around Australia for reviving a range of in Silkies and Sussex, which had become their main poultry breeds.

Lee lived her entire life at the little farm “Abergeldie” near the settlement of Hillside on Cattai Ridge Road. It was not only her home but also became her place of business and the inspiration for much of her art. In later years Lee played an increasingly important role in our family as the loving companion and carer for our elderly parents.

Lee was diagnosed with cancer in May last year and soon learned that her condition was likely to be terminal. She endured the effects of this brutal disease with her customary grace, courage dignity. Her determination to lead as normal a life as possible meant that, amongst other things, her family was able to celebrate together a number of important events last year, most significantly our father’s 90th birthday on 23 December.

Lee was admitted to for the last time on 29 January. Our mother’s strict instruction was that she was not to die alone and her brothers, her niece Belle and her sister-in-law Maureen took it in turns to be with her every hour of every day, while another niece Rose and partner Jack kept our company at home. Lee died peacefully on 12 February in the company of her beloved brother Trevor. RIP Lee Evans