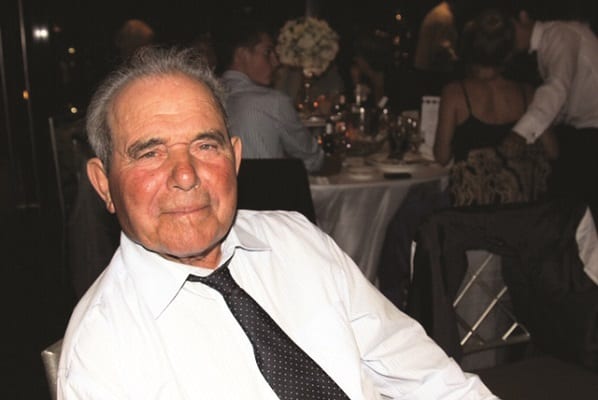 SALVATORE CALI, known to many as just Sam was born 28 July 1930 in Acireale Sicily Italy. He was the fourth child of five children for Salvatore and Maria Cali.

Salvatore had a happy childhood even though times were tough in Sicily between the wars. It was compulsory for all Italian young men to do Military Service and Salvatore was fortunate enough to be posted to Florence and Sienna in Tuscany Italy. While on leave Salvatore met the love of his life Rosaria (aka Sarina).

After his military service, Salvatore planned to follow his brother to Australia and make enough money to then return and marry Sarina. In 1953 Salvatore migrated to Australia, he arrived with one small suitcase and in debt to his family for of his voyage. Salvatore spent his first years in Innisfail Queensland, cutting sugar cane and even though it was hard work, he liked what saw and began to fall in love with Australia and all it had to offer.

In 1956 Salvatore married Sarina by proxy with Salvatore’s father standing in for him at the church. In 1957 she to Australia to be with her husband. Salvatore later sponsored his brother Mick to come to Australia and they all moved to Griffith and picked grapes. They were not afraid of hard work and really wanted to get ahead.

In 1962 Salvatore and Mick moved to Dural, purchasing a property and forming a farming partnership that lasted for decades. They never left the area they had fallen so much in love, it was now home. Salvatore raised his family there and after a lot of hard work, in the early they purchased the Galston shops. Cementing his ties to the community that he had grown to love.

Salvatore returned to Italy many times over his life to visit family and friends but every time he returned back to Galston, he would always say ‘it is so good to be home’.

Salvatore’s first language was always Italian, it was one thing he kept from his country of origin. His understanding of English was far greater than his spoken word and his favourite phrase when he was trying to make his point was, ‘don’t you speak English?’ It would always lighten the moment.

After Sarina and his family, Salvatore’s greatest love was food closely followed by soccer, playing cards and going fishing. He was happy to go fishing with anyone who asked and loved watching soccer live and on TV. If there was an international soccer match on TV you knew where to find Salvatore, of the day or night.

Other than providing a secure financial future for his family and the birth of his 3 children, one of the greatest moments in Salvatore’s life was the 50th Wedding anniversary party he for Sarina. For years leading up to 29th September this party took top priority. To be married for 50 years is a great achievement in anyone’s life but for it was something really special and a party was the way he wanted to celebrate, with his beautiful bride. The party was an enormous success. Salvatore and Sarina went on to be married for 62 years.

Salvatore Cali arrived in Australia with just the shirt on his back and has left an impression on everyone he met and everything he touched, his accomplishments have far exceeded his dreams. He leaves us with wonderful memories and the knowledge that anything is possible through hard work.