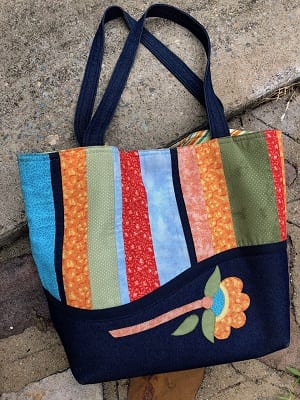 “ Down Pat”
Recently, my oldest son sent me a short video of his 11-month-old son walking and attached the comment “ Getting Walking Down Pat “. What a delightful video it was ( I love having Grandchildren ), but the words surprised me. “ Down Pat “ is such an old fashioned saying. I looked it up on Google, which stated its meaning as “well memorized ( to the point of being able to recite or perform whatever it is without hesitation” ). The origin seems to be unknown. Contributed by Christine Stockman

A Delightful Coincidence
Firstly I’ll say, “ I believe that God orchestrates surprise moments for us at times to encourage us to look up, think “WOW and thank Him “ Yesterday, I went into the chemist at Round Corner to inquire about a particular hand cream. Whilst waiting, a lady said to me “I like your handbag “ to which I replied, “Thank you, I do too. I bought it at a market day at Mountainview Retirement Village. It’s colourful, isn’t it ?” She paused…….. then said, “I made it.” WOW, what a special moment in time that was to meet and share with her. Absolutely delightful! Contributed by Christine Stockman

Fast Deliveries
A few months ago my toaster needed replacing so at 8pm I went online and requested delivery of my chosen item. At 10am the next morning a huge truck delivered our humble toaster. Impressive. But I think the story told to me by Dean tops mine. When pulling the sheets from his washing machine they ripped so needing a new pair he went online at 10am, searched bed linen delivery today and true to the website’s promise, they arrived at 2pm the same afternoon.

Recent Storms
In the recent electrical storms our house was hit by lightening which was very alarming. The phone connection was blown from the wall and the modem and my husband’s computer were casualties of the strike. We have been hit in the past which resulted in many appliances being fried but this time I thought, considering the direct hit we had come through fairly unscathed. That was until I had prepared the food for a feast for friends to be baked in the oven……ahhhhhh, panic. Call the electrician, I need my oven now. I would like to thank Phil for making a mercy dash on a Saturday morning to help this damsel, unfortunately the oven was also fried (not baked) and I had to get creative with my cooking implements. Thanks Phil for your time as I know you had planned a work free weekend.

More Northholm Budding Authors!
Year Seven Northholm students were given the task to select a picture an then create a story to evoke an emotional response in the reader. We think they did an excellent job and hope you enjoy reading three of the best excerpts from their assignments.

But the boat did reach shore. The field, lush and mesmerising is where it sits. A perfect tomb for a legendary water-craft. My feet squish under the lush green grass, scattered with bright maize coloured towers, peaking their heads to view the world. The grass darkens as it reaches the muddy coloured sand. The bank is not as appealing as the greenery, but its thick oozy quagmire reveals hidden treasures. The large jagged shells that survived the journey to the bank and the “incy wincy” translucent crabs with telescopic eyes scratching endlessly at the sand for morsels of food makes me admire the boat’s courage is such a hostile, environment, which seems to thrive on sending the weak to a watery grave. Meanwhile, dark clouds roll in and the threatening odour of foreboding rain stings my nostrils. My fear rises with the humidity. The boat’s beaten body takes in each drop of rain while screaming in agony. Its frail hull groaning against the harshness of the tide. As the rain keeps falling, the grass turns olive-green and the flowers droop in sadness as tears roll off their petals. The crabs scuttle furiously in the rain, trying to lodge themselves under the shells in a vain attempt to find protection from the deadly enormous rain drops. While the unmoveable shells try their best to escape, screeching like owls, as the barrage of rain drowns them. I flee for cover in the boat’s hull.

I stand still stunned, as the flickering flashing of dazzling lights blind me. Click! snick! The hungry snap of the camera lenses drowning out the sharp catty whispers of judgemental people pushed in all around me. The whispers build, hissing and crawling, piling up, waiting to strike and poison and injure. The comments sting, the words biting antlike. I feel attacked as I stand there as they judge me. The constant conversation of others repeat in my head. An endless loop of cruel cutting negativity. They stand too close, pushy and uncaring, invading my space without my permission. They jostle, stare, gawk and laugh tauntingly. Smirking and murmuring to each other. The walls close in on me suffocating me as people continue talking.

THE DESERT by Sam Shepherd, Y7 (an extract)

I clamber up the side of a colossal dune, barely able to stand on my two feet as the sand dissolves beneath them like fiery, sluggish, agonising molten lava. At the top I can see that I am surrounded by a brutal and barren ocean of sand, and I am beneath a sky of bright blue sapphire. The sand dunes rise and fall like waves in a terrifying ocean. The scorching flames of the sun lick against my skin and my face reddens as though burnt by the heat of hell. My skin feels like it has been scraped by sandpaper and gritty grains grind between my teeth and toes. There is no wind, no rain, just stale, raw air. With a Bedouin scarf wrapped around my head, I sit on top of mountainous Hercules, lurching to the left and then to the right with the repetitive, slow, metronome rhythm of each of his steps. The pads of his feet crunch through the crust of bone-dry sand. The decaying smell of my rations mix with my sweat and foul body odour. My mouth is parched, and my lips and tongue are dry, but the water from my bottle does not quench my thirst, evaporating in my mouth instantly. All I can taste is grit, dust and sour air.

THE GRAVEYARD by Luca Dalla Fontana, Y7 (an extract)

It was midnight and the end of winter. The stillness of the darkness was deafening. The silvery sphere suspended in the sky was the full, gloomy moon that shone down on the graveyard and made shadows on the ground. It helped me to find my way around the cemetery. It was my only source of light. In the distance, the eerie silhouette of the lifeless, tangled and twisted tree caught my attention as it creaked with every passing minute, every passing second. The solitary, wooden trunk was stripped of leaves. It was as dead as the corpses below the surface. Not a leaf, a drop of sap or a sign of life was to be found. Just as I approached, the shrill, ear-splitting sound of the loud squawking of the crow, like the dead screaming for help, rang in my ears. Whoosh, whoosh, whoosh, echoed around the cemetery from the furious flapping of the wings of the monstrous, deadly, black feathered creature as it swooped down and landed on the fragile branch above me. Its sharp talons clutched onto the fragile branch like an eagle gripping its prey. Crack. The branch snapped above my head. I ducked for cover for protection from the frightening and evil beastly bird.