HARDY BOWLERS BOWL THROUGH THE HEAT 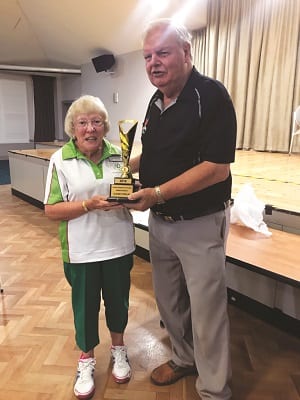 The first month of 2019 has seen the presentation of the Dural Sportsperson of the year, the ladies reach the final of the pairs and the men finish their Pairs Championship.

Dural ladies’ bowler, ELIZABETH WHELAN was a most worthy winner of the Sportsperson Award. In 2019 she won the Major Singles and also won the pairs, played No1 pennants, represented the District, played in a state final and was club secretary for 5 years and is now the Mitchell District secretary. This pocket dynamo is pictured with George Truelove, DCC board member, who the award each year.

The annual men v women trophy was played with the men winning again!