Dirt: The Original Playdough Of Humanity 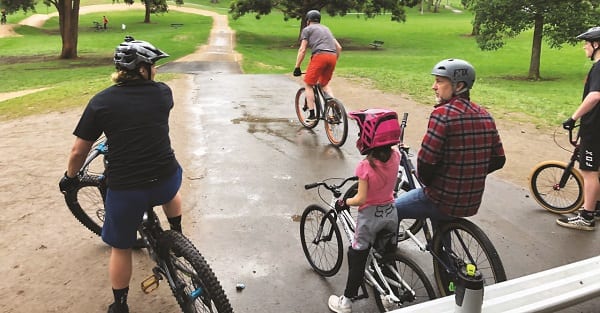 This is the first in a series of write-ups about sanctioned pump and jump tracks at
a postal code near you.

WHAT IS A PUMP TRACK?
A pump track is a circuit of rollers, banked turns and features designed to be ridden completely by “pumping” (generating momentum by up and down body movements) instead of pedaling or pushing.

Some pump tracks, like Crestwood, will also include a few jumps or, like the enormous new Bare Creek Park, feature entire difficultygraded jump lines for skills progression and physical challenge. Pump track surfaces can be dirt, asphalt, wood or ‘pop up’ shaped rubber tracks that can be set up and dismantled for ‘pocket’ spaces or events.

INDICATIVE OF A SOCIETAL SHIFT?
Land managers throughout Greater Sydney have had their hands full with, amongst their other duties, a surge of illegal trails, pump and jump tracks being built by local kids (and adults) in suburbs fringed by any open green spaces. It’s an outcome of the tough COVID19 trials of 2020, insufficient or no facilities for this kind of urban outdoor recreational activity and failure to recognise a meteoric rise in numbers of people enjoying playing on bicycles designed for dirt.

So instead of officials going straight for the usual punitive approach of menacing signs, land locking and demolition, better longterm outcomes for all might be achieved by;

A) Recognising the fact that many kids, youths and adults are not actually the slightest bit interested in ‘drive to’ structured, competitive team sports.

B) That there is a paradigm societal shift underway (both voluntary and mandated) toward ‘from home’ unstructured, social outdoor recreational activities; in either natural environments or the outdoor spaces within reserves, parks and even public schools.

Dirt is the original Playdough of humanity and engaging with it through play might be the next best antidote to surviving an increasingly sanitized, controlled and therefore anxious society. Intergenerational play is under represented in current urban and recreational strategies for our LGA’s and we urgently need the official facilitation of it to maintain both our sanity, and some sense of personal freedom.

We went to ride it a few weeks ago and it was, well, pumping! Riders as young as 3- to some well into their 50’s- were out there playing on bicycles with flat bars and knobbly tyres. Everything from purposebuilt jump bikes, to BMX bikes, tiny tot balance bikes and dual-sus mtb trail bikeswere represented amongst the happy crowd present on that day.

There are three different circuits one can ride, each with enough space for everyone, of any ability, to have a red hot go and stay safe. The track winds like a caramel river through the grass and trees of the reserve, so there is plenty of shade for non-bicycling adult minders (or tired riders!) to take a break from the summer sun.

This pump track also features several rollable jumps, so depending on how fast you can go and how much risk you want to take, you’ll ultimately get both wheels off the ground here, so to ride this track consistently is an excellent choice for MTB or BMX skills progression.

Apart from Hills Council, a huge congratulation must go to the build teams- Dirtz Track and Living Recreation, who finished the job in just two weeks, fulfilling perfectly the design brief from Hills Council “to create a dirt track that is novice and family friendly”