Hidden In The Hills Terrestrial Orchids 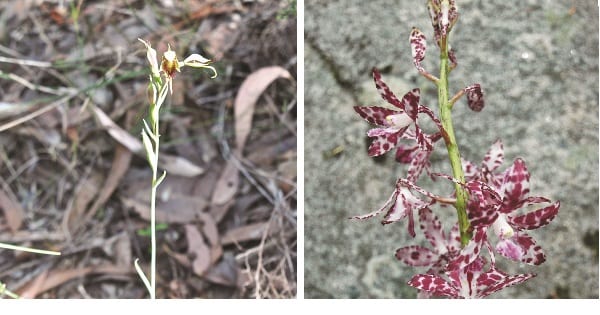 There are many ground hugging orchids that can commence flowering in early autumn, lasting through to late spring. One such plant is the Trim Greenhood Orchid (Pterostylis concinna).

When it flowers this orchid stands up about 250mm above the grassy environment in which it prefers to live. Its preferred habitat is the more open woodland that provides adequate shelter from strong sunlight. It is often found in quite large colonies within a local habitat growing amongst shorter sedges and grasses.

A similar species is the Blunt Greenhood (Pterostylis curta) which does not have the horn-like sepals protruding upwards from either side of the flower.

An unrelated terrestrial orchid is the Red Beard Orchid (Calochilus paludosis). The flower stem being up to 400mm tall and carrying numerous flowers which are characterised by hair-like extensions resembling a man’s long and untrimmed beard. It can be found growing in scattered areas of suitable habitat along the coast of eastern New South Wales, west to the Blue Mountains.

Surviving in dry, sandy as well as swampy conditions it is found in both heath and woodland environments, frequently growing under eucalypts.

As with many ground orchids there are similar related species which can overlap in similar habitat. The Copper Beard Orchid (Calochilus campestris,) growing on 600mm stems, tends towards bluish purple coloured hairs.

Whilst the Purplish Beard Orchid (Calochilus robertsonii), growing on 450mm stems, tends towards bronze purple coloured hairs. Yet another orchid sometimes found growing from the fissures in large sandstone rock formations is the distinctive mauve coloured Dipodium punctatum Hyacinth Orchid. This orchid gains its nutrients from decaying vegetable matter found either in leaf litter or in rocky locations.