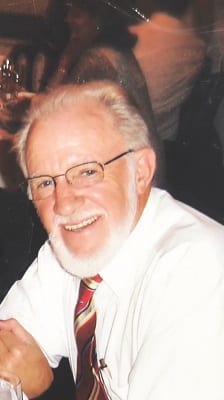 It would be impossible to accurately portray the fullness of William John Hayes’ life in the space available here. William John Hayes was born in Hornsby on the 9th December 1939. He was the second born child to the Galston Postmasters Dulcie and William Hayes. His siblings were an older brother Arthur and a younger sister Beverly.

He became a “Millwright” by trade but soon his passion for all things truck led Bill into starting his own carrying business in Galston.

He carted fruit from local orchardists and eggs from poultry producers to Sydney markets. Bill carted tyres, tractors and anything else that required moving from one place to another. He put in long arduous hours as did everyone working in agriculture and transportation in those times, but he always had time to assist those who needed a hand.

Bill met and married Helen. She became the love of his life and his soul mate.

In later years they became inseparable. If Bill wasn’t driving they would be found together, shopping, lunching or spending time with their family and grandchildren.

Bill and Helen raised three children. Two gorgeous, well behaved daughters Rebecca and Jennyfer and, as described by both of his sisters, a strong willed, extremely recalcitrant son David.

Their children grew up and went to school in Galston. They all married local partners and presented Bill and Helen with ten grandchildren.

Rebecca and her husband Richie had three children Isabella, Ethan and Matthew. David and his wife Julia had four girls Stephanie, Karina, Olivia and Amelia. And just to even up the gender count in the Hayes Empire Jenny and her husband Scott contributed three boys William, Brayden and James.

Bill was extremely proud and quite outspoken about the fact that he had five granddaughters and five grandsons. Bill loved driving and when the opportunity arose to work with his good friend George Cromie he jumped at the opportunity. He enjoyed his time with George carting shale to the brickworks and using all of the earthmoving equipment required to mine the local shale.

During his time with George he “moonlighted”, carting sodium, “salt” as it was locally known, during the night from Sydney’s wharves to storage sheds in Camellia. After leaving George, Bill spent two years driving front end loaders for Hornsby Council then took a job with PF Formations, a supplier of construction material in Maroota where he operated loading equipment for many years.

While still associated with PFs he again became involved with “salt”. This time Bill was using PFs loaders to pack it into storage warehouses then loading it onto trucks for distribution.

The foundation of young David’s future obviously began here. Bill would “press gang” him into working on the loading machinery in the salt sheds after school and into the night. This presented no problems to David as it usually meant time off school the next day.

During the later years of his “retirement” Bill began driving the truck he became synonymous with and totally recognizable in “The Kenworth” helping son David with his earthmoving and excavation business.

Bill was always happy when he was driving and one job David had recently, involved Bill carting fifteen loads of material a week from Mona Vale, a northern beaches suburb, to Canoelands for a period of five weeks. They would start work at 5.30 in the morning and finish at 5.30 in the evening. Sixty hours a week on Sydney’s roads. Pretty good for a young bloke let alone a bloody 78 year old geezer.

An ulterior motive behind Bill’s love of driving was the fact that at the end of the day back at the yard, he could sit around with his mates, more often than not with a Carlton Dry in hand talking about, of course, trucks, loads, numbers of gear changes and exchanging many expletive descriptions about the idiots on our roads. Conversations would inevitably lead to exaggerated stories about old times, good times and families.

Even in the last week of his life Bill was doing what he loved, driving “The Kenworth” carting material from a job site in Strathfield to Canoelands.

Fathers day weekend this year saw Bill, David and Owen Hughes travel to Macksville where they met up with Bill’s very close mate, John Nosworthy, and attended the “Rusty Irons Rally”. An event for vintage machinery restorers and fanatics.

Bill had made this an annual pilgrimage for many years. He would meet up with John and they would catch up with old trucking mates and enjoy having a beer with some of Australia’s ‘TRUE’ characters.

The Hayes family has lived in Galston for over 132 years and ‘Hayes Park’ at Galston was named in recognition of the service and local community involvement the Hayes family had in this area.

Bill carried on his family’s involvement with community issues.

During his life he was involved with The Rural Fire Brigade, the local Chamber of Commerce, Galston Community Centre and Hornsby Council.

I’m sure anyone who has dealt with council regularly at any level would agree this involvement was the probable reason for Bill’s black hair turning white.

Bill enjoyed going to meetings and being involved in local activities. He especially enjoyed raffle nights at the Galston Club, another place where he could catch up with old friends. Many of his club friends will fondly remember Bill particularly on the odd nights that he wore his wobbly boots home.

Bill loved his family events, birthdays, anniversaries, mothers day, fathers day it didn’t really matter what it was as long as family was involved.

He treasured Christmas time. Going shopping to Castle Towers or anywhere else with Helen, Jenny and grandson James. Although I think that may have been in an attempt to control the expenditure, which apparently was not one of Bill’s greatest successes.

His friendships were intergenerational. He was close to his children, his grandchildren, his children’s friends, his old friends and was able to happily sit and talk and be comfortable with them. Have a beer with them. Listen to their problems. Enjoy their successes but most importantly, be there for them.

Bill was always there to help someone in distress. It didn’t matter where you were or what time it was, if Bill could lend a hand, he was there. Nothing was a problem if he could help.

My wife Judy and I were recipients of Bill’s generosity. Sometime after Bill had left PFs, Sydney was experiencing a particularly bad drought and I had exhausted all of our dam’s water storage. We were cactus until Bill came to our aid.

Bill carted water to our orchard every day for many weeks during the fruiting season in an old Bedford truck fitted with an old two thousand gallon petrol tank generously given to me by my boss at the time and my friend Harold Shore.

He would start early and generally finish late carting from Glenorie to our farm at Forest Glen. Mind you every time I went past the stand pipe Bill would be yacking to another driver, shopkeeper or just someone walking along the footpath. I’d take over from Bill when I got home from work and without fail the question would be asked “Where’s Billy? How come you’re driving his truck?” Bill’s assistance during this time enabled us to irrigate our fruit and was instrumental in our orchard surviving the drought. It is impossible to express in words what Bill’s generosity meant to our family.

There were several events Bill considered important in his life. One of these was the annual holiday he and Helen undertook to Hat Head Caravan Park on the mid north coast of NSW.

Here all of his children, grandchildren and lots of close friends would spend several weeks together swimming, fishing, eating copious quantities of delicious foods and partaking of the odd social drink or two. Another of Bill’s special times was spending time with his family at their Lemon Tree Passage holiday house. Here he was able to enjoy many memorable hours with Helen, his daughters, his son and his grandchildren.

Then there was the annual family golf trip with the cousins. Bill didn’t play golf but enjoyed driving the drinks cart and laughing at the frustrations being exhibited by his golfing cousins. What helped make this a memorable golf experience was the fact that the males went golfing while the ladies went shopping.

These special times with Bill will be sadly missed by all of his family and his friends.

Just before he was placed into an induced coma he said to Helen, “Don’t forget the bins. I’ll see you in the morning” which epitomized his positive attitude to life and how important it was to Bill to follow routine and something that was scheduled or organized to be done, had to be done.

Bill considered himself a lucky man. He had his soul mate and loving wife Helen, his children and grandchildren whom he unconditionally loved and was loved equally by them in return.

Bill’s passing will create a huge void in the lives of all that knew him. He will be greatly missed.

May you rest in peace, husband, father, grandfather and special friend.