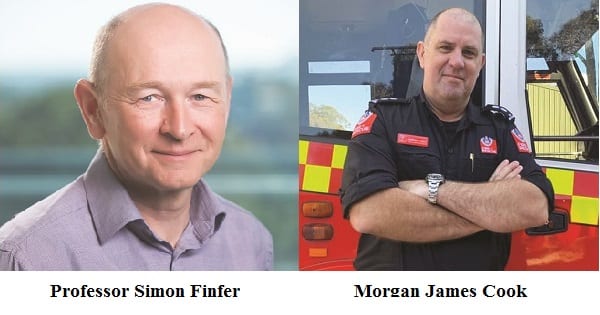 Congratulations to our locals awarded in this year’s Queen’s Birthday Honours.

Professor Simon Finfer’s career has prepared him for a front line role in Australia’s fight against the coronavirus pandemic.

Professor Finfer’s research focuses on sepsis – a condition in which the body’s immune response to infection starts to damage tissues and organs. Without fast treatment, it can lead to death or ongoing health issues.

“People who are dying of coronavirus disease in intensive care units are dying of sepsis,” he said. “The coronavirus infects the lungs, and in severe cases, leads to sepsis resulting in kidney, liver and other organs failing.”

Professor Finfer is a Critical care physician who has been working with The George Institute for 20 years and during that time has led transformational studies in critically ill patients to reduce mortality and shed light on one of the world’s most serious silent killers – sepsis. His 2003 study of the epidemiology of sepsis in Australia and New Zealand showed that this life-threatening condition was one of the major issues that needed to be tackled if ICU mortality rates were to be reduced. So began his special interest in not only reducing mortality from sepsis but also raising awareness of the condition both in our region and on the global stage.

His work has been instrumental in demonstrating that really robust, highquality randomised controlled trials could be done in the critical care population and lead to improved mortality.

credit; The George Institute for Global Health and The Sydney Morning Herald

Morgan James Cook – Galston – PUBLIC SERVICE MEDAL (PSM)
Morgan became a firefighter with Fire and Rescue NSW in 1990 and since that time has served in a range of operational and specialist positions.

He is an active firefighter having been involved in strike teams during numerous bushfire seasons as well as many large scale industrial and structural fire incidents.

Since 2012 he has been the Team Leader Fire Research within FRNSW’s Fire Investigation and Research Unit (FIRU), a position which has state-wide responsibility for the organisation’s critical efforts in fire safety and prevention research through the investigation of fires and emerging risks.

As well as initiating significant improvements in FRNSW’s capability, policy and procedures, he represented FRNSW with distinction on numerous multi-agency committees and work groups nationally.

He has been responsible for numerous initiatives that have enhanced public safety, often in close collaboration with other emergency services, peak industry bodies, universities and other tertiary institutions.

These initiatives have included the change of the National Construction Code for apartment building fire sprinklers, and to legislative change to fit sprinklers in all residential aged care facilities. He has also contributed to the development of the FIRU Research Facility for undertaking live fire burns/fire scenario reconstructions/fire investigation training and gas monitoring systems.

Morgan is one of FRNSW’s pre-eminent experts in fire investigation and research and his commitment to the organisation, and to the improved safety of the NSW community, for over 30 years has been exemplary.

Thank you Simon and Morgan for your outstanding service and commitment to your work. We as a community are proud of everything you have accomplished and achieved and congratulations on this well deserved honour.