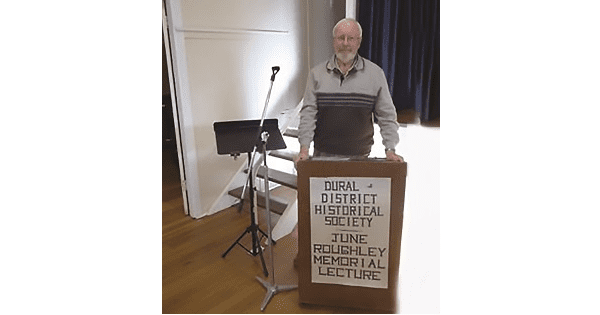 BRETT SOWERBY gave us a most enjoyable talk on the 10th August. Many questions followed and all were amazed at the amount of knowledge about James Sowerby, the topic of Brett’s June Roughly Memorial Lecture. James’s illustrations and publicity of the work of Sir Joseph Barks have given us a record of the first European contact with Australia by Capt James Cook. The display of rare books and illustrations engendered great interest. In the evening some members attended the Annual AGRA / Utopia Dinner and were most impressed by the interest shown in local history. The Society is ready to help with its extensive reference material.

On the 14th September at History Cottage, Emeritas Professor Donald Napper will talk to members about the work of the Colonial Architect, William Wardell, who designed many well known buildings, St Mary’s Cathedral being his most famous. He was also a rather vocal commentator on society and was much concerned about the western facade of the GPO building. A quick look before the day will be rewarded.

On the 20th August members visited the museum of the Oaks Historical Society before a guided tour of the district. It was a chance to see this historic landscape before it is for ever changed by the new airport. The current work is enormous and graphically shows the loss of history and agricultural land.

Dates for the diary : AGM on Saturday the 12th October. Tour to Hartley on the 15th October (possibly the 16th as well).

Our Society was sad to hear of the death of Ray Whiteman last month. Ray’s interest in
local history, especially the architecture of the early dwellings, is a valuable photographic
record of our local history.