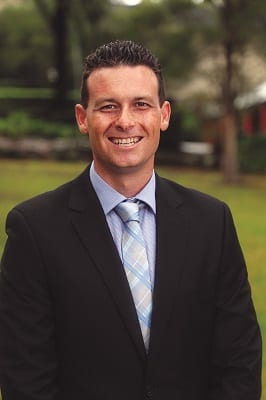 Mr Bradbury joins Northholm from The King’s School in North Parramatta where he is Director of Teaching and Learning.

Mr Bradbury is a highly qualified and experienced educational leader. He has been awarded a NSW Quality Teaching Excellence Award in recognition of outstanding teaching practice by the NSW State Government and was a recipient of both the Gandel Holocaust Studies Program for Australian Educators Scholarship and the NSW Premiers Westfield’s History Teacher’s Scholarship. In 2018, he has been selected to participate in the NSW AIS Leadership Centre Flagship Program which is a rigorous, holistic program for experienced school leaders in schools. He holds a Bachelor and Master’s degree in Education from the University of Sydney and a Graduate Certificate in Advanced Educational Leadership from Harvard University.

Since joining The King’s School he has held a number of senior roles including Head of History and Legal Studies. He has co-authored Year 11 and 12 History texts, been awarded a number of teaching awards and scholarships, and outside of school has been a junior development coach for both Parramatta Eels and West Tigers rugby league clubs.

Mr Bradbury steps into his new role with a high level of enthusiasm and energy, keen to get to know his staff, students and the parent community. 2019 for Northholm will be a year of renewed sense of energy, focus and enthusiasm.