Contributed by Diana and Jim Booth

I moved with our family to Laurie Road, Dural, in 1992. The house was built in the 1930s and was in a somewhat run-down state. The cedar plank weatherboard cottage was on a 2 acre block.

Over the years, there had been many additions and alterations made to the house in varying styles. It would be the oldest house in Laurie Road, and it was in need of a facelift, so to speak. The property has some very old and established trees. An orchard of fruit trees, Pecans, Macadamias, large gums, Crepe myrtles, Jacarandas, Camellias, etc.

The area was settled in the late 1800’s and was primarily a citrus growing area. There had likely been an earlier version (or versions) of the house that the citrus workers would have lived in. The house had originally been connected to Carters road directly. Probably Laurie Road did not exist at this time. 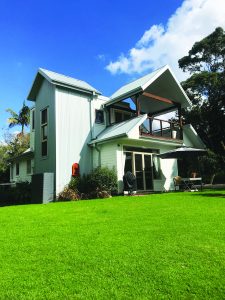 The property opposite our property had a derelict, burnt out house on it, which turned out to be the old location of the Ifield Engineering company. Dick Ifield was famous for many engineering inventions, one of which was a fuel pump used in jet aircraft engines, including the Concorde. He and his wife had 8 sons, one of whom was Frank Ifield, the singer and yodeller who was very popular in England and Australia from the 1960s onwards. Frank Ifield still lives in the area.

Partway down Laurie Road are the side roads Mitchell Road and Rosella Street, which along with Laurie Road are no through roads, all ending in dense bush. A fire trail begins at the end of Mitchell Road, which continues along a ridge above Galston Gorge for some kilometres.

The people of Laurie road are very friendly and helpful to one another. Recently a huge tree fell across the road and blocked our driveway. This was late in the day and we were totally unaware of this. Then we heard urgent knocking at our door with a voice saying ‘You can’t get out.

Our neighbour had already called the SES and was busy with his chain saw cutting branches to clear the road. Shortly after another neighbour arrived with a Bobcat and chainsaw. By the time the SES arrived, most of the problem was resolved.

We run a small Airbnb Business called The Stable, which we started about three years ago.

We have had some lovely guests from Australia and overseas who have come to stay. We had some guests from Holland who were thrilled when they arrived home one evening to see a small wallaby standing outside The Stable front door. They promptly sent a picture to all their friends in Europe. Running a BnB is always surprising as you never know who you will meet next!