LOST AND FOUND: ENDANGERED GANG-GANG COCKATOOS SPOTTED IN THE SHIRE 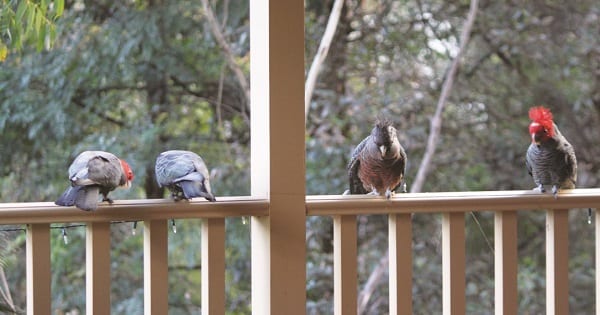 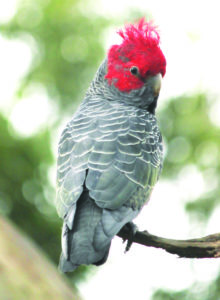 The recent sighting of Ganggang Cockatoos in the sky over Hornsby Shire Council’s Community Nursery has lifted the spirits of Byles Creek Valley residents who last observed the endangered birds in late 2016.

Hornsby Shire Council Community Nursery & Bushwalk Program Coordinator Mr Ross Rapmund saw a pair fly over the award-winning nursery. There have been more sightings from other parts of Pennant Hills and West Pennant Hills according to Council’s Facebook page.

“It’s possible that these birds are refugees from fire-affected parts of NSW,” Mr Rapmund said. 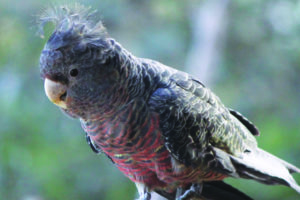 The population once extended across Baulkham Hills, Castle Hill, Cherrybrook and Dural. Clearing for farmland, residential releases and infrastructure resulted in numbers dropping significantly according to the NSW Scientific Committee.

In 2013, only 14 birds were recorded in the Hornsby LGA. This is one of the last known breeding grounds in metropolitan Sydney, with the Byles Creek Valley wildlife corridor representing a stronghold and providing suitable habitat with large tree hollows.

The adult male Gang-gang is a show-stopper recognised by its scarlet red head and crest with a slate grey body and wings. Females have a dark grey head and wispy crest. They are sometimes mistaken as a Galah in flight.

They are relatively quiet, compared to the screeching Sulphur-crested Cockatoo, sounding like a creaky gate or a cork being pulled from a bottle.

Their diet consists of seeds, berries, fruits and nuts from native and introduced trees and shrubs as well as insects and their larvae. Similar to many cockatoos, they are often left-handed!

The Gang-gang Cockatoo is the emblem of the Byles Creek Valley Union Inc which was started in the 1980s by Ms Robyn Smith to fight development in the wildlife corridor. Ms Smith has been instrumental in documenting and monitoring the species for the past four decades according to the organisation’s President, Ms Patricia Brown.

“After moving into Malton Road Beecroft in 2011 we would see Gang-gangs most weeks. They would fly from Byles Creek Valley through to Copeland Road East and we assumed then off to Lane Cove National Park,” Ms Brown said.

“Our last photo was taken at the end of 2016, but from this time onward we have not seen them although on occasions had thought we may have heard them in the distance,” she said.

“The lack of sightings seems to be coincidentally linked with the fragmentation of their habitat through ongoing clearing in this area for development, which is sadly a known threat to their existence.”

“It is wonderful that there have been new sightings of this amazing but critically endangered local population.”

Hornsby Shire Councillor Emma Heyde also recalls Gang-gangs visiting the big gums around her garden a few times every year when she moved to Cheltenham nearly 25 years ago.

“Our heating and drying forests are not providing the food and shelter birds and animals need, and bushfire is a huge risk – we need strong action on climate change to give them a chance,” Cr Heyde said.

“The other threat to Gang-gangs is cats. Seeing cats prowling day and night in my street which is close to the bush is extremely disappointing,” she said.

In 2017, Hornsby and Ku-ringgai Councils partnered with the NSW Office of Environment & Heritage ‘Saving our Species Program’ and local media to create a survey of the threatened Gang-gangs to determine their numbers and movement.

The Gang-gang population’s dramatic decline is likely due to a number of factors including loss of habitat and hollow bearing trees, increased urbanisation and potentially the arrival of other predatory birds. This places Gang-gangs at a high risk of extinction locally according to the survey.

The species are even doing it tough in the Southern Highlands according to Churchill Fellow, Peggy McDonald, the Founder of Higher Ground Raptors.

“They will feather pluck and toe chew very easily if stressed or miserable,” she said.

If you spot a Gang-gang Cockatoo in Hornsby or Ku-ringgai Shire please complete the quick survey at https://www.surveymonkey.com/r/ganggang