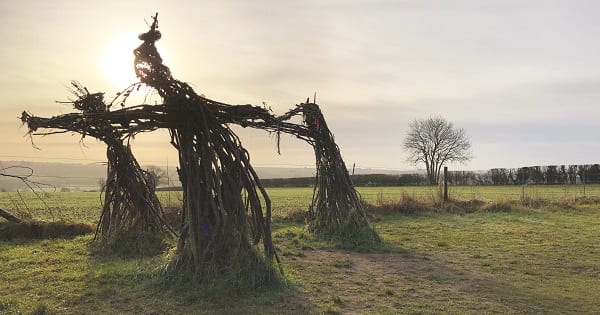 Kellie M Davies, author of The Clandestine Chronicles, pens a brief explanation behind her floundering around in paddocks outside of the quaint English village of Long Compton, home of the Rollright Stones.

For me, writing a novel entails so much more than the mere story told via words on a page. I like to immerse myself in the experience of research. After an unforgettable two weeks near Creston, Montana in the USA inhaling everyday life and scenes for ‘Mabon’, ‘Yule’, the second book in my series, led me to a picturesque location about forty minutes northwest of Oxford.

Protagonist Lucy DeBane and her sister Abigail find themselves unveiled as a witch in the local Long Compton pub, the Red Lion. I had travelled there to find out how characters Lucy and her sister Abigail get themselves out of a witchy situation – running through the paddocks surrounding Long Compton, miles up a hill and into the stone portal disclosed by the sister’s supernatural presence. The Whispering Knight stones (said portal) are remains of an actual burial chamber but for the purpose of plot, I was in situ researching the stones and their possible relationship to the third DeBane sister’s disappearance.

Here’s a snippet for your tastebuds!

I leaned forward to look out the plane window, hesitating at the greasy smudge a passenger had left on the plexiglass. Beyond the glistening metal wing, the outside world was in miniature – tiny hills, tiny square fields, tiny houses. It all shined an iridescent emerald in the bright foreign sun.

How was I ever going to find her down there in that tiny world?

Mathilda was gone, without a word. It was an organised manoeuvre, too precise for someone as vague as my sister – more at home picking daisies and gazing at stars than dealing with the mundane of plotting some clandestine plan.

Abigail instantly withdrew. From dynamic, she’d become a shell, so Abi was packed up, on a plane and presently in England – on the hunt for her twin. She’d been given 3 days. If Abi had no leads on Mat by the third, back up would be sent – me.

The in-house witch feud over my volunteering had caused a gaseous purple vortex in the cellar that gained momentum every time a voice was raised. But I was mentally in England before the Mustang’s tyres had screeched to a halt at the airport curb.

I folded down the page corner and laid my latest knowledge conquest on my lap; a plain cover grimoire of advanced mixtures – melange. The window once again beckoned.

Mat, where are you?

A low hum answered and beat dull, like an ancient drum sounding its verse against my chest – my amulet was calling. I pressed a finger to its polished centre, then traced the casing; dragon to knight and floral plumes in between, snatching my hand away before the call was heard.

Evlynn – would the vapour vamp appear here? On the plane?

The last time she’d shown her face, Evlynn had remorselessly murdered her niece Elania, tortured my Gil – almost beyond repair, and wildly suggested I join her in England. I was fulfilling her divination, she’d be amused by that, at least.

The plane’s descent pushed my patience. I huffed hot, wet air to fog up the window then drew a small sigil for protection under the greasy smudge. To say my witchcraft skills had ‘arrived’ was like saying ‘look at the light snow’ during a blizzard, they had consumed me from the second I had begun my training. And controlling these inherited gifts … Ha!

I picked up the grimoire, and flipped back to the marked page. The title ‘Controlling your Desires’ shouted out exactly what I was thinking. I needed control – just long enough to find a witch, kill another and return to love.