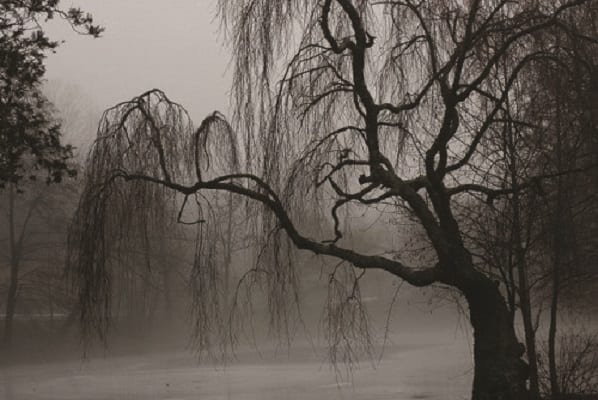 Continuing our exploration of cemeteries this month we look at trees found in and around the older cemeteries. We are defined by how we relate to and interact with plants, animals, other humans and this applies also to trees within our world. In the language of the cemetery, trees have specific meanings and superstitions attached to them being used not just for landscaping ascetics or shelter. Planting mountain ash or rowan for example are said to deter evil spirits from bothering the dead although the basis for this belief is unknown. Cypress trees have been in vogue since Roman times and its branches have been used to adorn the areas where the departed have lain in state and were carried by mourners as a sign of respect. Hollies were believed to protect tombs and monuments from lightening strikes, probably due to their spiky leaf margins.

The long line of tradition continues in the use of ivy which has been used to cover tombs and gravestones in the spirit of friendliness and a representation of immortality. Complimentary to ivy is the myrtle symbolising achievement and also eternal life together with the laurel and the bay tree, the former representing accomplishment and heroism and awarded by one’s peers, the latter perseverance.

Oaks are revered in many myths, legends and folkloric beliefs. Sacred to both Zeus and Odin the mighty oak acts as a conduit for lightening, the authority of the sky gods, to earth. Oak leaves traditionally meant power, authority especially military and victory. Palms are of course synomonous with religious beliefs, with Christians using it to mark the Passion which ended in Christ’s victory over death. The palm has also been used to commemorate victories and heroes have been greeted by crowds bearing palm fronds in celebration of their deeds.

Ophelia wistfully observed that rosemary was for remembrance and traditionally it was placed on coffins and given to mourners as a favour. It is still planted in cemeteries and is the universal symbol of remembrance.

Although not often seen in cemeteries these days, willows represent perpetual mourning.

Proving that death and taxes are our ultimate end the English Yew is a reminder. The tree is sacred to Hecate guardian of the underworld, death and the afterlife. Every part of it is toxic and just like taxes can hasten an early demise.

There is symmetry between trees and cemeteries as they both share the common crumbled earth where we have entrusted our dead so that the wind may stir their voices.

The trees mentioned are all northern hemisphere species however one Australian species, our national floral emblem, Acacia Pycnantha or golden wattle represents unity which is appropriate as it unites us with the departed to complete the art of Remembrance.