New Captain
Each year at our Annual General Meeting we elect officers to fill the various positions within the brigade. After being Captain of Glenorie Fire Brigade for 4 years, Matthew Lloyd has stepped down from this role. Sean O’Brien, who has been the Senior Deputy Captain for 2 years, has now been elected to take on the role of Captain and Glynn Lloyd, who was a Deputy Captain, has taken on the role of Senior Deputy Captain. Matt has been an excellent Captain and has contributed a lot of time and effort to the brigade which makes us the excellent team that we are today. We are all privileged to have had such a great leader. Thanks Matt! Matt will still be a significant part of our brigade and will be taking on the role of one of our Deputy Captains. We are very excited to welcome Sean as the new Captain also. Congratulations Sean. We look forward to continuing our commitment of serving the community as part of a great team.

New Spinal Board
Being in the Rural Fire Service doesn’t mean we only fight fires. Sometimes we are asked to assist with other tasks such as rescues. We have recently received a new Spinal Board and our members have also received training on how to use it efficiently. Hopefully we don’t have to use it!

For further information go to www.rfs.nsw.gov.au or contact the Brigade: Station Phone: 9652 2017 (leave a message and someone will get back to you) or talk to a real person, James: 0422 168 914. Visit the brigade stand at the Glenorie Growers Market on the fourth Sunday of the month in the grounds of Glenorie RSL. Facebook: Glenorie Rural Fire Brigade Email: [email protected] 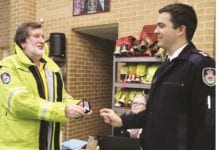 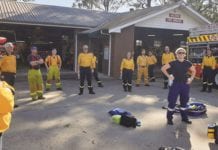 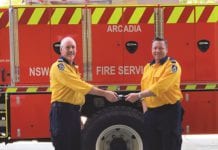