There will be over 40,000 books for sale at Galston Community Centre on June 25, 26 and 27, including some first editions and some signed by the author.

The collectibles table will include a signed copy of The Heritage of J J Hilder (Australian artist 1881 to 1916); a 1902 copy of Dew Babiesby Helen Broadbent and a rare copy of The Ladies Handbook of Home Treatment, a medical reference book for women, written by doctors F C Richards and Eulalia S Richards (a married couple) and first published in Australia in 1905.

The Rotary Club of Galston’s annual book fair has a huge history itself and was first run in 1997. It has raised a large amount of money during that time to support projects both at home and overseas, including local Rural Fire Service Brigades, Galston High School, Riding For the Disabled and Youth Insearch to name a few.

Book sale organisers Richard Young and Ted Shade said amongst the 1000 titles being sold this year there are many books of note including: The Founders of Australia: a biographical dictionary of the First Fleet by Mollie Gillen; Chronicles of Crime142 by Felham; Australian Rain Forest Trees by W.D Francis; Getty Images Cars; Gourmet Pilgrim-Germany; a book on Dr Ludwig Leichhardt; and The Australian Victories In France, 1918 by Monash.

“Great Cathedrals of the Middle Agesis a wonderful book, especially for people who can’t visit these magnificent shrines in person. The photos are fantastic, the text is informative, but the real stars of the shows are the cathedrals themselves, which I consider the most wonderful examples of architecture created by man.

“The Atlas of Australian Wars gives readers a tangible link between the operations and campaigns described in the text … it covers frontier conflict and colonial wars during the 19th century and the 10 wars in which Australians have been involved in the centenary 1901-2001. It also covers peacekeeping operations. The atlas relates a magnificent story of the competence, courage, and self-sacrifice by Australia’s armed services.”

All the books are in categories.

There will be dedicated areas for children’s books, vinyl records, CDs, DVDs, puzzles and games.

Trading hours on Friday to Saturday will be 8.30am to 5pm. On Sunday the sale will operate between 8.30am and 3pm when there will be clearance sale bargains 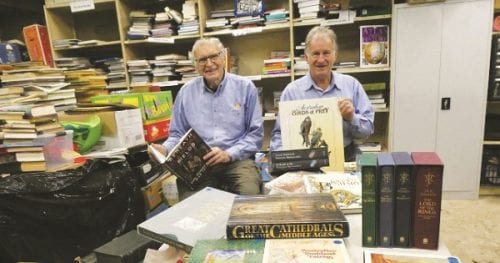