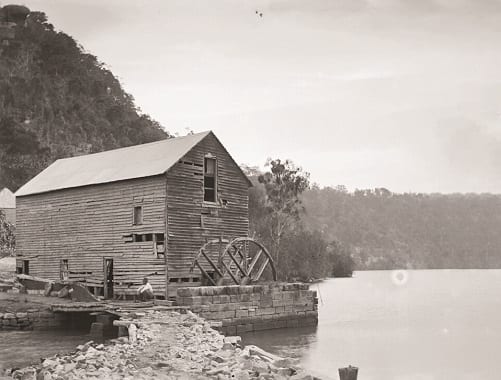 THE DHARUG AND LOWER HAWKESBURY HISTORICAL SOCIETY would like to extend an invitation to the general public to join us as we explore the Old Singleton’s Mill located 15 klms downriver from Wisemans Ferry on the Hawkesbury River. It was only after Phillip’s tenure as governor that the rich soils of the Hawkesbury area became a major food source for the colony. Mills were built to grind grain before it was transported along the river and then down to Sydney.

James and Benjamin Singleton (the town Singleton was named after) applied for land on the Hawkesbury to set up a tidal mill, prior to 1820. The mill did very well; by 1834 James had built a larger mill down stream on the southern side near Laybury’s Creek. The water driven wheel which was 5 metres in diameter and the grinding stones weighed one ton each and were referred to in the Australian Town and Country Journal as, ‘one of the lions of the Hawkesbury’.

We will have a quick morning tea and if numbers warrant it we will carpool. Then we will drive along Singleton Road down as far as Laybury’s Creek. Whilst there are no ruins we can access the area to see where the mill was sited. From there we will retrace our steps back along Singleton Road to One Tree Reach a 50 hectare wetland established by Hornsby Council in the 1990’s. There is an area where we stop for a picnic lunch (it might be advisable to bring a chair or rug to seat on) and there are a couple of walks along established boardwalks which we can avail a visit.

Following lunch we will call into the Watkins Orchard (TBC). The Watkins Family were members of the Society for many years. Their orchard has been in operation in this area since 1901.

We will then wind our way to the Wisemans Ferry Cemetery for a visit. It has been several years since we have been there and Hornsby Council have done restoration work on the graves. Then finally back to Wisemans Ferry to collect cars.