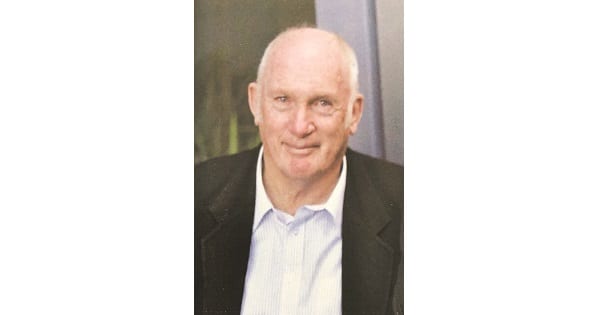 If he saw us here today, he would be shaking his head at the fuss. But he probably wouldn’t be saying anything; he always listened more than he talked.

Whilst the 4 of us are family, never has the term immediate family been more relevant. Dad considered everyone family, whether he had known you for 5 minutes or 25 years, he always had time for everyone. 2 feet or 4 feet was irrelevant.

If I reflect on when I think he was in his happy place, I think about these places:
• In his shed with a dog building, fixing or whatever else occurred in there. All I know was there were ice cream containers filled with every nail, nut, bolt, and screw of any size required for any job at any time. And those little metal washer things, they had a breeding life of their own in there!

• With us, his family and with you, his extended family, in community.

• Behind the wheel of a 4wd in some far-flung place with red ochre sand or gibber beneath him.

When I think of things he didn’t like, the best I could come up with was eating chicken or eggs ( clearly he had some kind of issue with poultry ) and people who slammed car doors!

I remember one of our last night’s camping in the desert somewhere and being a bit sad that it was our last desert night. My job was to collect sticks for a fire and Dad asking me what was wrong. I told him I was sad about leaving the desert and he said to me if the red dirt gets into your veins you’ll be back, and after lots of trips back and another one planned, I know he was right. I think we were kindred spirits in that regard.

I think there were lots of life lessons bestowed upon us over the years, but the ones that stand out to me are:

• Family first no matter what

• Tolerance and respect of everyone – even if they have wronged you. The man was incapable of holding a grudge.

• And ‘anybody can do anything if they really want to do it’. He generally recited at infinitum to the point of nausea. I guess coming from a man who was told he’d never walk again and spending time in an iron lung after being diagnosed with polio in his early teens to a man who stood every day 6 days a week, that was a life style mantra.

A lesson I have taken so much to heart, I had it tattooed on my wrist – ask Mum how happy she is about that!

Our house was full of love, laughter and respect. Practical jokes were a lifestyle choice, and it was a case of if you can’t beat them, join them and rarely did you beat him. There was rarely a raised voice but after a long day of haircuts, if he had settled in after dinner with a glass of wine and you heard the phrase “by geez if I get up!” you knew that was a warning shot. If he ever did get to his feet, you knew you’d better be gone from that room cos nothing good was coming from whatever was going to happen next.

I don’t remember a time when he wasn’t involved with the community or a charity in some way. He cut the hair of homeless kids, of prisoners at Silverwater jail, we fed the disabled after work on a Saturday morning, collected for the Salvo’s every May and he was a founding member of Galston Rotary Club. Those club members became family, and together they achieved loads of significant initiatives. And that even today we are still raising much-needed funds in Dad’s memory.

He was easily a winner of heart and minds. He seemed to leave a lasting impression on everyone. Even now if I need something done locally, I drop my married surname and readopt Bowerman, and if it’s urgent, I’m Melinda, Greg’s daughter, and that’s how you get stuff done. No-one ever asks, “Greg who?”. I often think, lucky he wasn’t a dreadful human being, or we would be screwed.

We are thankful for the many ways in which Dad shared his life with us and others.

In particular:
• His 52-year partnership with Patricia and in fact the last words shared between them were, “I love you” and “I love you too”.

• His love of family and all that embodied.

• His commitment to our community through the Rotary Club of Galston and the Chamber of Commerce in particular.

• His kindness and good humour to everyone and everything he met. • What we estimate to be more than 400,000 haircuts over 40 plus years in his shops at Galston and then Glenorie.

The numerous world problems that must have been solved by whoever was in the Barber’s chair at that moment in the shop.

And so recently he saw the “lights coming over the hill” and whilst they blinded us, he chose to go towards them, and for that, we are sad but thankful he is now at peace.

And like those shifting desert sands that we both love so much one day, the term ‘Greg’s daughter’ won’t be as meaningful as a legacy as they are today. When you ask us “what can we do?” Perhaps as an extended family, you can help us to keep that alive a little longer so Greg’s grandkids can continue to get stuff done around here too.

And while it has taken more years than perhaps it should, I would like not to be known any longer as Melinda, Greg’s daughter but instead firstly as Greg’s daughter, and a far cry secondly, as Melinda.

Trish, Brad and I would like to thank everyone who has shown love and support during this difficult time and of course the management and in particular the staff at Mark Donaldson House in Rowland Village when Greg has lived for the last 2 years.

As a family, we would like to continue Greg’s valuable work in our community. Should you wish to donate in his memory, please do so to Galston Rotary Club’s, “Stop Polio Now” fund.

Greg was a founding member of the club and a long sufferer of polio.

Early Years
Greg developed polio in his early teens and months after his return home from the hospital, it was advised that he would need a lot of swimming and exercise to regain the use of his legs.

His family built a tennis court on their property and soon after they formed the Bowerleigh Tennis club. His friends would have a hit up after school, and on Saturday mornings they would play, then would water, broom and bag the court. Greg would then show his skills with lime marking of the lines getting the court ready for the adults to play in the afternoon. Simply happy times. Over time the tennis team successfully progressed through the grades till they were playing A grade tennis under the Boweleigh banner.

Greg was the oldest of his group of friends so he had the first car. This was a little red Austin 7 with a soft top and white walls. That car was his pride and joy and after each outing many hours were spent polishing and cleaning it. Greg did his hairdressing training at Stutts at Round Corner and enjoyed his time there. Later he branched out into his first shop in Galston and then Glenorie.