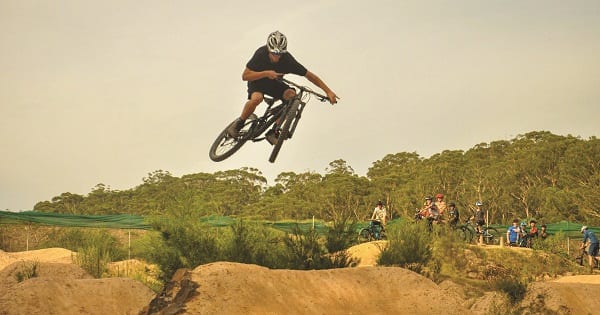 Hornsby Council’s website features just three rather confined, sanctioned dirt bicycling areas for its vast, 455 square kilometres. So, let’s get out our microscope this month and examine the area to see if it contains any evidence of pump & jump track molecules.

OMV PUMP TRACK… PHYSICAL AND MENTAL LIFELINE FOR OUR YOUTH.

With the exception of the N. Beaches, OMV is one of the busiest little dirt pump & jump tracks in Sydney. The beating heart of the small OMV mtb network is snugly nestled within the old Hornsby Quarry (in case you weren’t aware), up against the southern fence line of the now disused NorthConnex fill/quarry rehabilitation staging area.

You have to ride through a trail bottleneck at the pump track to connect with most of the short, purpose built XC and Gravity trails and it is near impossible to resist giving it a red hot go. There are two dramatic entry options: one is a gap jump and the other is a steeply-bermed gravity switchback. Neither is recommended for beginners! Walk down and scope it first if you’re new to mtb! 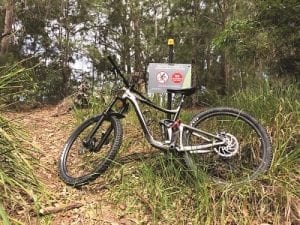 From the elevated roll in mound, there are three different jump and/or pump lines to choose from, depending on your level of ability. It’s a shame that the substantial ‘catch berm’ at the apex of all the lines isn’t double the height, due to the speed one can maintain on this track. It would have been excellent fun to rail it high or low. Due to over-use (because there are only two other tiny sanctioned pump & jump tracks to ‘spread the load’ for the whole of Hornsby Shire and beyond) the surfaces and lips of the jumps are worn out; So please support the social SNORC mtb club fund raising rides so that the trail fairies can do their dirty work. POINT YOUR BROWSER TO: https://youtu.be/brK5G9RC1LU

OMV pump & jump track was purpose-built by Synergy Trails during 2016 and cofunded by HSC/Northconnex/NSW Govt. as a generous joint venture to keep OMV open to the public during the quarry rehabilitation process.

If you’re a family with pre and early primary school kids, you might enjoy an hour together here between the playground and the tree-lined, shady dirt bicycle track. There’s a generous open area too where you could all run around and play ball. Little kids will love riding their mountain bikes here, as track features are scaled down and moderate enough for them.

The Hopeville track is not a BMX track. One can’t define it as a pump track either because it is too pedally and it has been hemmed in all round by dangerous ugly logs, metal stakes and ropes- effectively barricading this tiny dirt track off from anything that passes as natural. What a poor, bullied little track! Although it has existed here for fifty years, in 2021 it looks like the Hopeville bicycle track and its dirt surfaces are now considered to be very detrimental to surrounding bushland. Add the now ubiquitous ‘No Unauthorised bike trails’ signs and this park is currently a perverse “ride, but don’t ride” experience.

MONTVIEW ‘BMX TRACK’… CAN YOU WHIP IT?

Across the mowed expanse of the oval behind the ball sports catch fences- one can see some tantalizing rivulets of formed dirt beckoning. Montview isn’t a BMX track either; but it is a rare gem in Greater Sydney- namely an easily accessible suburban dirt jump track with just enough features and edginess to keep all ages of rider interested.

From a central, elevated mound, riders can roll off in either direction to enjoy one of three quick circuits. There are two modest kicker jumps (both have been rounded out with over-use) but they’re enough to get both tyres off the ground and even whip it if you have the skills. There was a silent digger parked at the end of this track, so perhaps custodians Hornsby Council are intending to bestow some TLC upon this rare, hallowed slice of officially blessed mtb earth? Two bermed corners either side of the central mound will get bicycle cornering skills on point, and there is a fun selection of rollers leading you to and from these berms. On the central line there is a modest gap jump if you want to progress your jump skills.

During a hot day one can sit under the shade of a few trees bordering the oval, and take a breather while enjoying the lovely views over Provest Creek Valley. There’s also public toilets and drinking water nearby, courtesy of the sports oval. And the lovely Corner Café is just a few minutes ride away at the intersection of Somerville and Galston Roads.