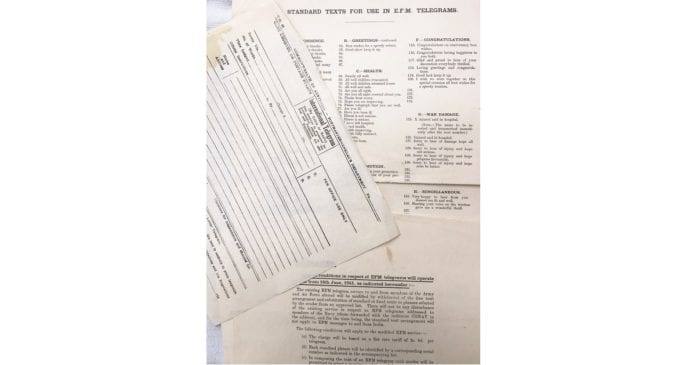 The Society was pleased to receive old farm papers from an early family in Arcadia. They deal with the day to day costs and income of the farm and are interesting because they show marked differences when compared with to-day’s figures. Some crops yielded higher income than we might have expected, while costs show marked variations between those of labour and manufactured product. However one thing is clear, the Community was working together to share and to pool resources during those Depression and Post War times.

Another set of papers from an earlier time of adversity in the DDHS Collection, gives an example of communication using a method that is better than its present day form. Telephones were not common so an expensive telegram, charged at a per word rate, was sometimes sent. In 1941 to encourage communications between those in the Services and those at home, The Post and Telegraphs for New South wales devised a cheaper system.

The accompanying photo shows a selection of how this was done. For the cost of 2 shillings and 6 pence and using the code, the sender would select suitable phrases and the corresponding number to fill out the Telegram form. In doing so conveying, maybe in a more intimate and a meaningful way, what the present day Emoji attempts. While 30/46/36, might sound rather severe, “ Darling, all well at home best wishes” does convey more than the endless images.

So here were are in continued concern about the Covid19. The Society has suspended the monthly meeting and tours, although the June Roughly Memorial Lecture on the 8th August might still be possible. In the meantime use the free time to contact friends, read and research. Maybe 120 or 136 or 73. 71 from DDHS