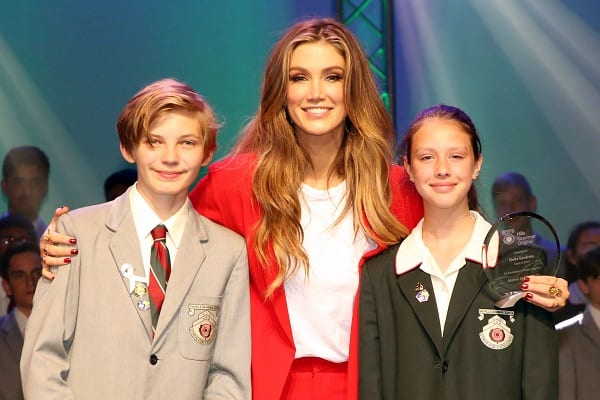 There was a buzz of excitement and anticipation at the School’s Annual Presentation of Awards last December. Who was going to be this year’s recipient of the Hills Grammar Original Alumni Award?

The award was introduced in 2015 to recognise the achievements of a Hills Grammar graduate and celebrate the individual’s sustained excellence in her or his field of endeavour.

The inaugural award was presented to Mr Joel Edgerton (Class of 1989) for his work in the film and television industries and in 2016 the award went to Mr Robert Ovadia (Class of 1990), a dual Walkley award winning journalist.

In 2017 Hills Grammar honoured singer, songwriter, actor and TV personality Ms Delta Goodrem (Class of 2002). The awardee‘s identity is kept a secret until the ceremony and in this case, it was probable that she would not be in the country so a video was prepared. Only days before the event the school heard the good news that Ms Goodrem would be there in person to collect the award.

Delta has achieved world acclaim and made recording history in Australia; her first album ‘Innocent Eyes’  was one of the highest-selling debut albums in Australian history. It spent a record-breaking 29 weeks at #1 in Australia, and topped the Australian Albums Charts and reached 15x platinum in sales.

She became the first-ever artist to have five #1 singles on the Australian charts from a debut album and was awarded the ARIA Albums Artist of the Decade in 2010.

Since then, Delta has recorded 17 Top-10 hits, four #1 albums, and over 8 million records sold worldwide. Her latest album Wings of the Wild debuted at #1 and her tour broke records as Delta became the highest-selling Australian touring artist in 2016.

It was a huge surprise for students, staff and parents that Delta could collect her award in person and Year 8 students Melanie Dobson and Brayden Sim were incredibly excited to introduce and award her on the day.

Delta was very humbled by the award and addressed the 2000 strong audience with much joy and emotion, “I’m a very proud Hills Grammar girl. When I think of my time at Hills Grammar, I loved school so much. I loved the mix, surrounded by nature, being inspired in the arts and loving sport. I made wonderful friends who continue to be my very best friends today.”  Delta continued to encourage the students to be kind to one another and support each other to find their passion. “I was given the space to find that light in me – to develop my passion while still being a part of the Hills community.”

Visit the school’s website for information on tours and 2018 Open Day www.hillsgrammar.nsw.edu.au

Service To The Community Builds Character