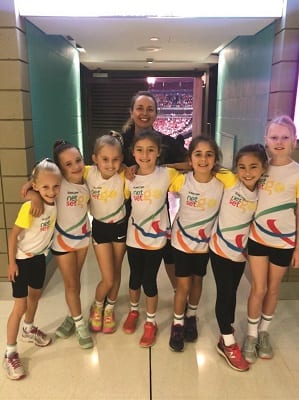 Most Sydney netball supporters were looking forward to Sunday 28th April as it was the Round 1 Derby between the two rival NSW Suncorp Super Netball teams, the Giants and the NSW Swifts. However, a small group of 8 & 9 year-old NetSetGO players from Galston Netball Club were more excited than most, not only were they attending the game, but had also been selected to play in a demo game at the halftime break.

The girls were full of energy in the lead up to the big day and even had an extra training session with their NSG Coach, Jo and Club Registrar, Kate to ensure they were on their game.

When game day arrived, the nerves were starting to show, however these nerves were soon replaced by excitement when the NSW Swifts team high fived them all as they swapped places on court. Playing in front of over 8,000 netball fans is no mean feat, certainly more than the usual turnout supporting them at Pennant Hills on Friday nights, but the girls kicked into action with the first blow of the whistle and the six minutes of game time flew by. The crowd cheered with each goal and all the girls had an amazing time, asking afterwards if they could do it again!

Galston Netball Club would like to thank Netball NSW for this wonderful opportunity. Such experiences can only encourage our players’ love of netball.

Galston Netball Club is running 7-week NetSetGO clinics for girls and boys aged from 5-10 who are keen to give netball a try and learn the foundation skills. Please contact our NSG Registrar at [email protected] if you would like more information.