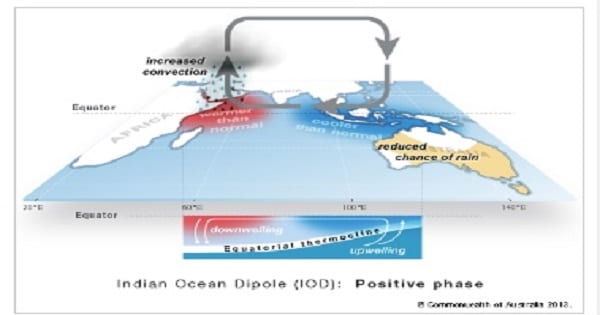 These forecasts are based on the positive Indian Ocean Dipole (IOD) which is weakening and will likely end in early January while the negative Southern Annular Mode (SAM) is likely to persist until the end of December then rapidly decay.

Indian Ocean Dipole
Sustained changes in the difference between sea surface temperatures of the tropical western and eastern Indian Ocean are known as the Indian Ocean Dipole or IOD. The IOD is one of the key drivers of Australia’s climate and can have a significant impact on agriculture. This is because events generally coincide with the winter crop growing season. The IOD has three phases: neutral, positive and negative. Events usually start around May or June, peak between August and October and then rapidly decay when the monsoon arrives in the southern hemisphere around the end of spring

Southern Annular Mode (SAM)
The Southern Annular Mode, or SAM, is a climate driver that can influence rainfall and temperature in Australia. The SAM refers to the (non-seasonal) north-south movement of the strong westerly winds that blow almost continuously in the midto high-latitudes of the southern hemisphere. This belt of westerly winds is also associated with storms and cold fronts that move from west to east, bringing rainfall to southern Australia.

The SAM has three phases: neutral, positive and negative. Each positive or negative SAM event tends to last for around one to two weeks, though longer periods may also occur. The time frame between positive and negative events is quite random, but typically in the range of a week to a few months. The effect that the SAM has on rainfall varies greatly depending on season and region.

The El Nino or La Nina system is currently ‘inactive, which means there is little or no sign of either developing in the coming months.