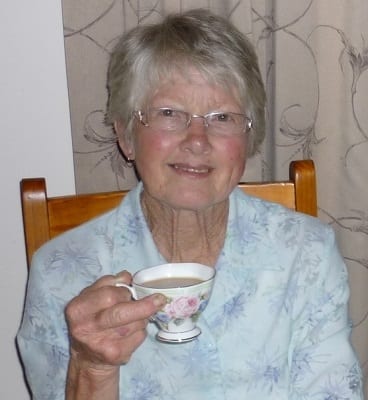 It is hard to put a life into words. Our mum and Naina put so much life and love into everyone she touched.

Val was born in Bankstown in 1940 to proud new parents of Marie and Roy Palmer. They moved from Bankstown to Baulkham Hills around 1945 where they had a poultry farm. They were happy times with Val’s grandma also living with them in a wheel chair. Primary school was at Baulkham Hills with Bev Keene, who they holidayed with, and June and Melva, who are still best of friends to this day. Favourite cousin Julie has fond memories of her childhood growing up with Val, being lucky enough to have one of the first TV’s in Baulkham Hills.

At age 16 Val met Bill at the local School of Arts where Bob, Arthur and Bill decided they should get dance lessons. Bill said it could only help. Val always loved dancing and was very good at it, so the dance lessons paid off. He got the girl he said was so pretty.

Val always wanted to be a nurse, so after leaving Home Science School at Parramatta it was off to Parramatta hospital to start her nursing career. This didn’t last long as night duties were affecting her social life, which prompted the move to clerical work in the X-ray Department where Val worked for many years and made lifelong friends with Moira and Brenda.

During the courtship of Val and Bill they were given a block of land by Val’s mum and dad in Keene Street Baulkham Hills and this was where they build a new home ready to move into when they married in 1962.

At this stage life was very busy helping run Bills engineering business at Riverstone which could never have worked without Val’s help doing deliveries with a baby on board most of the time in the Austin Ute. Then it was back home to family duties and up to all hours of the night making sure all the bookwork was in order. They still always managed lots of social occasions with the neighbours. Holidays with “the crowd” this is a group of friends that started from school days. They had such a lot of fun with all the families motor bike riding and caravan trips with camp fires including a great trip to Ayres Rock with the Gill family.

More space was needed and the move to South Maroota with the same view of the Blue Mountains was the best thing they ever did. Life was great with unlimited bike riding, farming, cows, driving of paddock bashers and even shooting rabbits which Val was a crack shot! The Whitehouse family introduced Val and Bill to the locals. This of course led to many many dinner parties and themed dress up nights with lots of dances at South Maroota Hall. Not that we ever saw Bill dance! Val would cut out a dress pattern and wear it the next day. Unfortunately this skill didn’t seem to get passed down the line.

Christmas puddings in the cloth was 17 one year. I am sure lots of people would have tasted one or two. Val also enjoyed cooking cakes and slices for the Childrens Medical Research for their fundraising.

After a serious Diabetic illness in 1992 we then had another bonus 26 years.

In this time Val helped raise grandkids Allis, Jack, Roy, Steven, Sara and James. Val was then known as Naina which is Welsh for Nanna. Sleep overs at Nainas were a little too much fun with just one of her sayings being “don’t tell mum I gave you chewing gum”. There was only one rule at Nainas and that was don’t ever eat all her jelly beans on the kitchen bench because she needed them in case of a low blood sugar reading. Naina would say she was “Happy as the birds in May” when with the grandkids.

The last few years have been a bit of a battle for our Naina. Bill found extra strength each day to run the house and keep Naina at home as long as possible with the help of their wonderful carers.

Naina didn’t have a mean bone in her body and just went with the flow. There are so many famous sayings, the one needed now is “lets pop the jug on and have a cup of tea”.