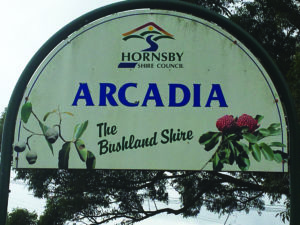 ARCADIA – means a pastoral retreat. The grant to George Hall of 600 acres, on Marramarra Ridge, was given the name ‘Arcadia’, from the mythology of a rural utopia, in Greek legend. At the head of Calabash Creek, Arcadia was a pastoral area of farmlets and orchards. Arcadia was also known as Galston Heights in 1886, and another local theory suggests that the current name was adopted in 1894 when the public school opened. The name was suggested by G. Shearston, a retired Royal Navy Officer and resident. Shearston had visited Arcadia in Greece and he was reminded of Greece in the local area countryside. The name derives from a mountainous region in the Peloponnese which the ancient Greeks associated with the ideal rural life.

BEROWRA – said to be Aboriginal for ‘place of many winds’. The parish was originally named Berowra, and the town established on Peat’s Ferry Road took its name from that. The road from the railway station to Berowra Waters was completed in 1902, which was when Jack Smith began to operate a ferry. Before that Berowra was only known as Dusthole Bay. Berowra is believed to be derived from ‘Perrara’ to which the earliest known reference occurs in the Sydney Gazette. “Last week 8 very fine pheasants were shot at Perrara … south branch of the River Hawkesbury … by one of our most experienced foresters.” The pheasants were in fact lyrebirds.

BERRILEE – The Aborigines here used to refer to the sows and pigs of the white settlers as ‘birra birra’, and from this the name of the settlement, Berrilee, grew. In the early 1900s Berrilee was known as Calabash, which means a gourd, or the dried, hollow shell of the calabash (tree), used as a vessel.

DURAL – Dural was thought to come from “dooral” meaning a hollow tree on fire at the bottom, with “dooral dooral” being plural for many hollow trees on fire. Aborigines used to smoke possums out of trees by lighting a fire at the bottom. Surveyor James Meehan used the name Dooral Dooral for the area when surveying the Great North Road in 1817 (now Old Northern Road). However, Reverend Clarke’s 1840 diary entry showing Dooral gulley, and an 1805 reference to the valley of Dorell at the Northern Rocks have indicated that “dooral” may have two meanings, or a broader meaning of valley or gully with many trees on fire.

FIDDLETOWN – In the 1890s William Small and Horace and Fred Henstock were granted land in the area subject to the residence clause, that is, they had to spend at least one night per week on the property. To liven up their evenings they learnt to play the fiddle and played at local dances in the Galston area, and hence the name. 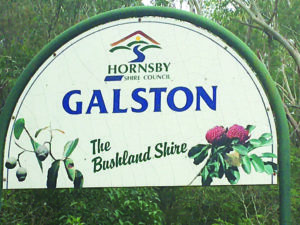 GALSTON – name taken from Galston Creek which joins Berowra Creek at Galston Gorge. The name Galston was suggested by Alexander Hutchison who came from a village of that name in Scotland. The name was officially adopted in 1887. A track through the gorge had existed since the opening of the railway line in the 1880s but it was very steep and difficult to negotiate. The road through Galston Gorge was constructed between 1891-1893 using men left unemployed as a result of the 1890s depression. Surveyor Ebsworth surveyed the route and put in seven hairpin bends on the steep eastern side of the gorge. The two wooden McDonald Truss bridges were built from materials that had been man-handled down the cliffs with ropes and pulleys. 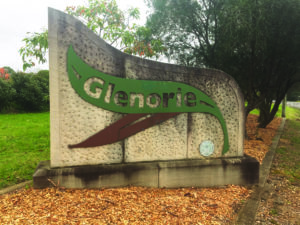 GLENORIE – Glenorie was originally known as North Dural. The first land grants were made in the 1820s. In April 1894 local residents offered the Colony’s Postmaster General two names: Hazeldene and Glenorie. The name Glenorie was accepted because it had the support of the local progress association. Glenorie was named after a town in Scotland. 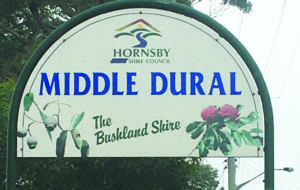 MIDDLE DURAL – This suburb is located between Dural, Kenthurst (previously Little Dural) and Glenorie (previously Upper Dural). In 1819 Thomas Best was the first person to settle in the area and from 1828 until 1836 he operated an inn on Old Northern Road for travellers on their way to and from Wisemans Ferry.

MAROOTA – According to Ruby Ramm, in her recollections ‘Life at Lansdale’, it is an Aboriginal name meaning ‘much water’. It was first mentioned in 1827. There are a multitude of springs in the area, the largest of which was estimated in 1970 to make 90 million gallons of clear water each year.