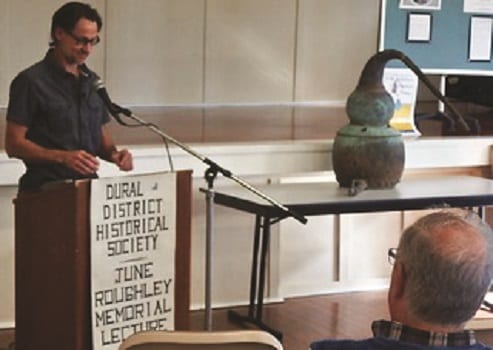 On Saturday the 11th August our annual June Roughley Memorial Lecture was given by Darren Hopkins, in the Arcadia Community Hall.

Here was an excellent example of the work of the historical researcher. It is his or her function to study every document for relevant information on the chosen topic. It is exhausting and intense work. It involves endless hours in libraries, museums and like place. From this, hopefully, will come a body of work, similar to an encyclopaedia, on one subject. This becomes the material used by historians to prepare family histories, local historical societies to assemble their references and to better understand where a community is placed in the overall story of a country. Such was what we heard from Darren after more than two years of research, triggered by the finding of the Arcadia Still on the land once owned by William Fagan in Arcadia. This body of work, Irish Distillers in Colonial Times, will be used by the Society and others, to give long overdue recognition of the Hall Family in our district. It will give us a full Fagan Family story and it will give historians the material to better understand distilling in Australian history.

The market value of alcohol, in early Colonial times, was so high it forced the government to enact severe laws in an attempt to prevent its illegal distillation. Darren selected to give us the stories of how leading citizens could not resist the opportunity to make fortunes. They employed others to take the great risks. They protected their interests, when acting as magistrates or law officers, to remove the opposition by sentencing them to far places of punishment. They protected their own illegal workers with light sentences or outlandish judgments or actions.

Some of the distillers were able to avoid discovery and they prospered. One such person was William Fagan. So successful was he that he was able to buy large landholdings. He was hard working and an astute businessman and he used his new wealth wisely. The Fagan Family story gave this district the fruit industry that became the largest in the British Empire. Their community contribution still benefits us and the family name is on our cenotaph.

All of Darren’s research is now available at History Cottage and researchers are welcome.