The only thing missing from the latest production in The Galston Concert series on Sunday, 30th April, was the backdrop of the Opera House with its lavish set designs. Otherwise, if you closed your eyes, you could have sworn you were there.

Singers from Pacific Opera – the promising tenor Joshua Oxley and soprano Livia Brash, who was a semi-finalist in this year’s prestigious IFAC Handa Australian Singing Competition – thrilled the audience of just under 200 people at Galston Uniting Church. Brash, in particular, impressed with the clarity, purity and range of her voice. You might also be interested to know that, since the Concert, Livia has won the Opera Foundation AIMS Graz Award. As such she will be heading to Graz in Austria to participate in a six weeks intensive study programme with world-class instruction (Deborah Voight and Barbara Bonney are guest tutors this year).

Ably accompanied by Zsuzsanna Giczy, who performed technically difficult reductions of opera scores on the church grand piano, Oxley and Brash sang selections from a number of classic operas, including Una Furtiva Lagrima from The Elixir of Love, a solo and duet from La Boheme, and my personal favourite, Love Unspoken from the final scene of The Merry Widow. The Merry Widow is both an opera and a ballet and as they sang, I could picture the wealthy widow Hannah Glawari and Pontevedrian diplomat, Count Danilo, reunite and dance together.

Young Artist guitarist Ben Secrett was also a featured performer. He delighted the audience with the arrangements he performed of several popular songs, such as the Beatles tunes Michelle and Yesterday, and the film classic, Somewhere Over The Rainbow. Murmurs of approval could be heard from the audience as he finished each piece. Secrett told the audience that he had performed in this very venue six years ago for his higher school certificate music exam, while a student at Galston High School, and that it was a pleasure to return under less strenuous circumstances.

The next offering in the Galston Concert Series on 30th July will feature French organist Pastor de Lasala playing the Galston Uniting Church historic organ, leading brass Principals from the Opera Australia Orchestra plus a return by Ben Secrett with vocalist Zara Stanton.

Should you require further information, please do not hesitate to contact Helen Jordan, Promotions Coordinator, The Galston Concerts – 9653 2079. 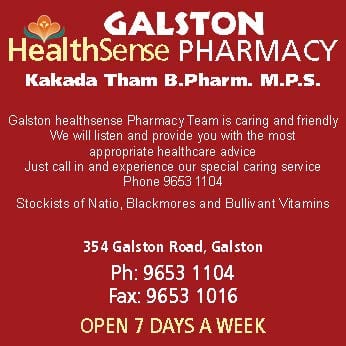