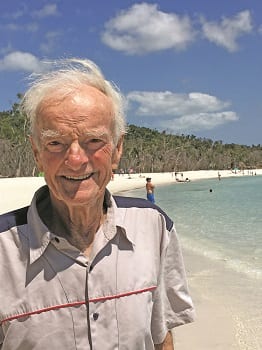 Friends and family gathered on Saturday (July 28) to remember Dural resident Ron Burton who died in a tragic boating accident.

The keen sailor had been on his sailing boat on Friday, June 20, and was heading to shore at Hunter’s Hill in a dinghy when it overturned and he hit his head on rocks. He was unable to be revived.

His wife of 48 years, former Hills Shire councillor Barbara Burton, said her husband had loved boats all his life and had bought “the love of his life” Mistral II, a classic wooden two-masted schooner, in January 1969.

“We sailed Mistral II in Sydney Harbour, Pittwater and up the coast to Cairns and back,” she said.

Ron was a builder who built the family’s home in Dural in 1970. He started building at the age of 19 for his uncle and aunt and, at the age of 23, formed his own company, Shereline Homes.

It is believed he designed and built the first red brick veneer triple front house in Sydney in the 1950s and went on to build about 3000 more project homes in Sydney Newcastle, Wollongong and Blue Mountains

An avid reader and follower of current affairs, he joined the Australian Labor Party in 1990s and was a committed supporter. He was a keen cross-country skier and was a member of Kosciusko Alpine Club for many years.

Barbra Burton said: “He was 84 and thought he was 16. He had boundless energy and enthusiasm.”

“Ron adored his family and treasured every moment he could spend with his young grandchildren and great grandchildren,” she said.

“He will be remembered by his family for his love and support and his desire to look after us all.”