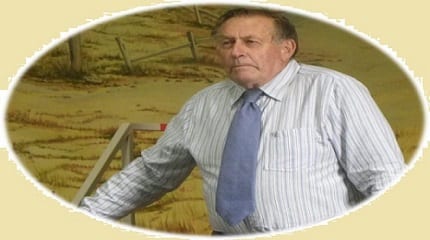 Raymond Charles Whiteman was born on the 21 st April 1933 in the family home in Hill Street Camden.

Ray was the first-born child to Charles and Lilian Whiteman.

His first brother Ken was born 2 ½ years later in Camden in October 1935. Beverley was also born in Camden in June 1943.

Ray spent his childhood and first schooling years in Camden until October 1943.

When Ray was 10 years of age, his family decided to move to Glenorie.

Rays father Charles had been in the family retail business in Camden – F. C. Whiteman &amp; Sons. Where Charles ran the grocery department. Charles was interested in horticulture and wanted to be an orchardist.

This passion lead them to Glenorie where Charles and Lilian chose a property at 952 Old Northern Road Glenorie, they named the property ‘Bega’, Due to their love of the south coast and Bega area.

Ray started at Glenorie Public School when he was 10 years of age. He had the same teacher Mr Burchett who taught him till he left the school. Can you imagine having the same teacher for all your primary school years…..

Ray started High School at Parramatta Junior High in Macquarie Street. After 2 years he and his parents made the decision for him to attend Granville High School, as it allowed greater choice for his developing career interests.

Ray needed to catch 2 buses and a train just to get to Granville High.

He then decided to pursue his interest in the electrical trade and completed a pre apprenticeship as an apprentice electrician.

Ray had a passion for music and wanted to learn how to play the organ, he had lessons after school in Parramatta. Which must have improved as he went on to play at his local Church each Sunday and did till the very end.

When Ray was 15 years old he started working for N. Downing &amp; Company (Electrical Contractors) in 1948 where he stayed for 8 years.

His first pay packet (believe it or not), was 6 pound 9 shillings and 3 pence, equivalent to $12.92 per week, this was the apprentice wage.

Rays first car was a little Fiat – grey 2 door 1948 model. Ray had been saving his money for his first car. So when he turned 17 he was straight down to the police station to get his license.

Ray told us the story about back in those days, when there were no blinkers on cars or brake lights, so it was all about hand signals for turning and braking. One arm out the window indicating what you’re doing while your driving. Just a little different these days…….

When Ray reached 17 he naturally chose the Navy to do his National service time as he loved being out on the water and sailing became part of his life.

This same year Rays youngest brother Bruce was born in Glenorie in November 1950 and Bruce too, shared his love of sailing.

At the age of 20 Ray became a Scout master. He had undertaken training at Castle Hill to be a leader. This is when the Scouting movement started in Glenorie in the Memorial Hall. There were only 8 scouts at the beginning.

Bill Roughley came in as an assistant scout leader as the numbers were growing. The scouts participated in a lot of fun activities such as camping and sailing.

Ray applied for a grant for 8 acres of land to build a scout hall.

The flooring from a house in Harrison Road became the floor for half of the scout hall, the rest was built new. The hall was built by Arthur Hughes and Percy Franklin, the timber was sawn by Lyle Hughes. The kitchen floor and a lot of the timbers and the toilet buildings were donated from Mid Dural School. The Mid-Dural fire shed was donated to make the frame for the new storage building.

The scout hall officially opened in 1957.

I met Skip when he was doing the electrical work on Mum and Dads House in Stevens road, he talked to me and my parents and encouraged me to join Scouts, this was about fifty five years ago.

He taught me to read a map, tie knots, pitch a tent – he took me hiking – caving – camping, taught me to sail which was the joy throughout my youth. He encouraged me to work towards my Queen’s Scout.

He was a man that took me places, spent time with me, taught me things that I would have never known if it was not for him.

I was not special in anyway there were many many others who he spent time with over the years to bring out the best in all of us. He was our Scout leader – he was Skip.

Scouting was my life then and I became a Cub Leader working side by side with Skip helping him do it his way (that was the easiest way). Ray worked to keep Glenorie Group functioning and growing, he was the driving force for so many years.

Ray was also an influence over a young electrician when I worked with him on and off for a few years after my apprenticeship when I first started contracting.

When I left Scouting our relationship was not as close. We would see each other at community functions, up at the shops around and about. It was always as if we had only seen each other just the other day. When I was diagnosed with PD he came around to see if he could do anything to help. That was the man he was. I did not realise how much he meant to me until I was told he had passed.

The man I am today the values I hold true, the things that I have done for the community, are due to the influences of Skip/Ray your brother made on me as a boy and young man.

I will miss him
Your Friend
Ron

Thank you Ron for your kind words.

(Brian)
Ray started his own electrical business in 1956 in Glenorie, he had a Hillman utility Comma.

Charles and Lilian owned a Halverson Cruiser which was named ‘GLENORIE’ moored at Bobbin Head. Many great memories were made on this boat.

As you can see all the boys follows Dads passion for boats.

Grandfather Tegel (Lilians Dad) had a small open boat on Sussex Inlet. Many a holiday was spent there. Grandfather Tegel built a home on the water at Saratoga on the Central Coast. He also had a boat which was a steel Motmarlin which is a half cabin boat with a motor, and it was moored at Saratoga.

As for another sport, Rays played tennis on Saturdays at Glenorie.

Ray went on to purchased a 50ft Yawl/Yacht named ‘EAST WIND’ which was moored at Huntleys Point in Sydney. Our families enjoyed many a sail with Ray. I remember quite 6 clearly as Uncle Ray pulled up this massive yacht ‘East Wind’ up to the wharf and we all boarded. It was a memorable Australia Day as we sailed right under the Sydney Harbour Bridge.

Ray tightened the sails and tacked the yacht towards the heads, where the East Wind was leaning hard and sailing along at around 8 knots, which truly felt exhilarating! Meanwhile, Robyn remembers trying to have lunch and losing her cutlery overboard. Its remained as one of the best Australia Day in my life time!

Rays first property was a house with 5 acres on Old Northern Road Glenorie.

His next property was at Wisemans Ferry on the McDonald River.

He then purchased a property on the corner of Schwebel Lane.

Ray then wanted more space again and found 101 Spur Place in Forest Glen. He then purchased his last property 948 Old Northern Rd Glenorie from his mother Lilian in 1993.

Ray was a proud Red Cross Blood Donor for 50 years.

(Warwick)
Ray was a very active member of associations and organisations.

 Glenorie/ Maroota Bi Region Forum – This is a land care group that is interested in developments in the area.

 President and public officer of Eastbend Rural Communications – this organisation produces the magazine ‘The Living Heritage’. Main focus is a community based magazine which going for over 20 years history of Maroota and district.

 And a Justice of the Peace

Ray has been the recipient of many awards and recognitions:

 1976 – Ray was awarded a medal of merit by the Area Commissioner of Scouting for 21 years for his loyal devotion to Scouting.

The Chief Commissioner of Scouts in Australia, Mr Bruce Garnsey, said “what a fine man ‘Skip’ is” and presented Ray with a plaque as a gesture of gratitude from all the parents of the boys involved in the 11th Australian Jamboree held in Melbourne.

 2007 – Rotary Club of Galston awarded Ray with a Community Service Award – for the following contributions, they are numerous and I would like to read the recognitions for this award:

– The first Scout leader at Glenorie when Scouts formed in 1954 and his leadership for majority of the 50 years of Glenorie Scouts.

– Member of the Glenorie Memorial Hall Committee including President for a number of years.

– Ray’s organisation and planting in conjunction with local Councils all the public gardens and trees (red gums) in Glenorie.

– The collection of all the photographic history displayed in the hall. The stained glass windows in the Memorial Hall were made and donated by Ray.

– He has been the Chairman of the Parks Committee for quite a few years.

– Chairman of the Glenorie Progress Association, a position he held for several years.

– Ray works, along with members of the local Glenorie RSL Sub Branch, to prepare and care for the gardens around the Wal Buckingham Memorial Park and the Glenorie cenotaph.

– Ray was the local representative for the Red Cross and Salvation Army and organised Door Knock Appeals each year.

– Ray received an award for being park ranger at Glenorie Oval from Baulkham Hills Shire Council.

– Ray was president of the Glenorie Liberal Party branch and a member of the Maroota Forest Conservation Committee.

– Ray was a person who saw a need for bettering his community and simply carried it out.

(Brian)
Ray was a humble and worthy recipient of this award, many family members attended this special evening which was held at the ‘Waterview Restaurant’ Berowra Waters.

Ray was a long-standing member and was the current Vice President of the Glenorie RSL sub branch. Ray was instrumental in taking on the challenges to ensure the Glenorie ANZAC Dawn Service occurred each year at the Cenotaph. He prepared the gardens and the cenotaph for this annual event. His leadership in the service, the message and the hymns at the Anzac Day services were very important to him.

Ray put the community first and will forever have Glenorie in his heart.

Ray was always there to help, support and just have a conversation with anyone in need.

So many people were a part of Rays life and he will be greatly missed – there is a void in this community, it will not be the same without Ray Whiteman.

Raymond Charles Whiteman your family and friends are incredibly proud of the person you were and the 10 contributions you have made to make this community, our family and our world are much, much better place because of you.

The example you have set us as your nieces and nephews with your morals, your Christian belief and the standard of respect that you displayed all your life, we were so blessed to have you in our lives.

On all our visits you would never ask for anything in return just time to sit and enjoy each other’s company. You will be and are already dearly missed. We love you and thank you for being our Uncle Ray!