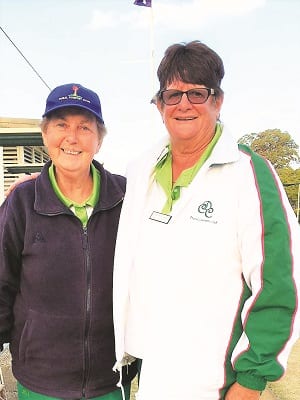 With no club competitions underway at present at the club, a quiet time was anticipated, but the top bowlers had other ideas and entered the district pairs competitions, both the open and the senior sections in Mitchell District. On day 1 in the Senior competition, Di Sweeney with Liz Whelan won both their matches but were eliminated the next day. In the Open section, Robin Davidson with Eileen Bromley and Sue Vindin with Christine played superb bowls, winning both their matches. Sue and Chris kept up their great bowls and reached the final, going down by a shot,12-13 to a highly regarded team from The Hills. Naturally the club is very proud of these achievements specially as there were members of the state squad playing.

Back at Dural, the ladies played a Trophy Days competition when random teams were pitted against each other over two days with the player with the highest total number of shots winning. The winner was Margaret Yeend. Kath Sach and Leone Lesslie shared second place and Barbara Roberts fourth. Congratulations, as to gain top points over two days is very difficult.

Twelve members are heading south to Bomaderry for the annual State Carnival where they will play two games each day for three days with the sixteen top-scoring teams playing off on the Thursday and Friday. One team is hoping to improve on their previous section wins and the others will be looking to emulate them.