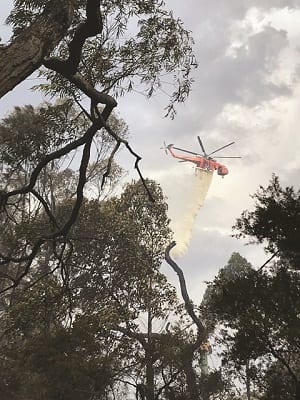 It’s now the season for hazard reductions in The Hills Shire, and also the time when scheduled burns are cancelled due to rain. At the time of writing, we recorded 89mm in one 24 hour period, which will prevent the RFS from carrying out planned burns for some foreseeable time.

Some of our residents are frustrated with the time it takes for their local Brigade to burn their particular property. It is important that our residents do as much as they can to prepare their own properties for the oncoming fire season, because there are many reasons why volunteers cannot carry out a planned burn. Bad weather is but one of them. In addition, burns are carried out on a shire-wide, seven-year burn plan, with a broad strategic vision for rendering the whole Shire safe. Brigades work together to a predetermined plan, not by individual brigades choosing to burn in their own small patch. In Middle Dural, we have submitted two plans for potential hazard reductions in 2019, to our District Office, but these are on the back burner because we will be assisting other Brigades to burn areas of higher priority.

We assisted Maroota Brigade with a potentially severe bushfire a few months ago, with help from the aircraft stationed at Richmond Airbase.

At this time of year, Hills Shire Brigades hold their their Annual General Meetings, when all operational and executive positions are up for re-election. Middle Dural Brigade’s AGM was held in earlyApril at our station in Mid Dural Road. All members of the public are entitled to attend, to see how their Brigade is organised for the oncoming year.

It has been a good year; four new members have completed their basic training and have been welcomed into the Brigade. Once again, please consider becoming a volunteer. You can join us at any time, with training courses several times each year.