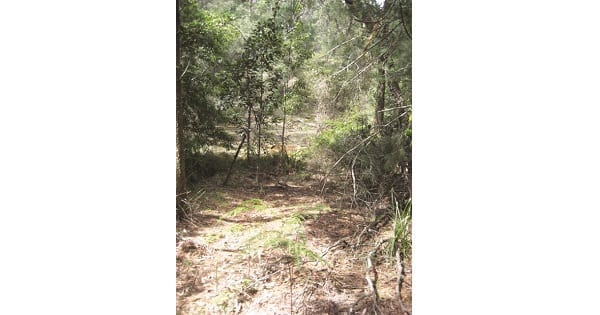 This is the time of the year to drive through “Our Gorge”. The clearer than normal air of a Winter morning and the mist filled gullies, make it a uplifting start to the day. The water fall and the MacDonald bridge are familiar to all but what of the other items we miss because the traffic makes it almost impossible to stop. These are the record of our local history.

There is no time to inspect the seven water troughs that provided water for the horses, the two sets of graffiti recording the military and picnic groups, the aboriginal ochre quarry, the coach lay-bye and the access to the stone cottage on the Galston side. This last mentioned item is connected to a controversial Sydney identity who was probably the basis for Hurtle Duffield, the leading character in Patrick White’s book, “The Vivisector”.

George Adolphus Thomas, born in 1864, acquired 106 acres of land in Galston Gulley in 1890 and built a stone cottage as a retreat from where he lived in North Sydney. He was a noted watercolour artist, painting scenes of Sydney and surrounds and held exhibitions of his works. He was traditional in style and taught at North Sydney Technical College. He was a fierce critic of the Impressionists; writing many florid letters to the newspapers expressing his disgust at what was being exhibited by them.

As a highly respected authority on Ancient Egypt and the Coptics, having studied in London and Paris, he assembled a dictionary of hieroglyphics and grammar and the four volumes are in the NSW State library. In 1928 he became the honourary archaeologist of the Australian Museum. He was a founding member of the Theosophy Society in Australia.

As a frequent ferry traveller between North Sydney and the City he became aware that not enough life jackets were carried and he campaigned for safer Harbour travel. That section of the Harbour was extremely dangerous because it crossed the busy shipping lanes. His letters pressing for a Harbour bridge were 20 years before time.

The cottage was damaged in a fire in 1910 and a later fire removed much of the rebuilt structure. In 1940 the land was sold. The fence opening was closed to prevent access but the track can still be seem if you are quick.