Luisa and Tom
Early in March on a perfect Autumn morning, Bjorn Hansen from UB Shack was both offical photographer and father of the groom when his son Tom married Luisa. It was a moving experience for everyone at this intimate wedding on Freshwater beach, even the bathers (while respectful) watched the pageantry unfold.

Tom met German born, Luisa while they were travelling and they both knew straight away that they belonged together. While they have an elaborate ceremony and celebration planned in Germany they chose to legally marry in Australia. I was so happy to be invited to conduct this simple wedding for both Luisa and Tom as they are so deeply connected and their love for each other shines so evidently through their smiles. 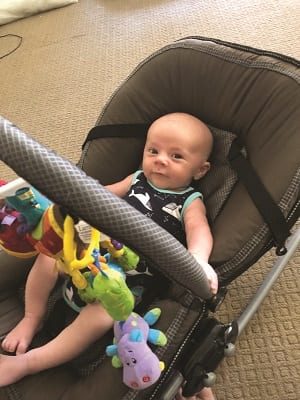 We had our six week check and he came in weighing 5.1 kg and 59.5cm long. My how he’s changed our lives for the better he’s just such a happy Chappy when he’s awake, sometimes a bit cranky when he’s tired or hungry, but that’s the norm.

The beginning is harder than you expect but it all becomes worth it when you get your first big real smile; when they watch you and babble talk back is just so rewarding. Each day there is a new sound he makes and it just makes Matt and me appreciate being new parents and the things we will get to show and learn with him along the way. We are looking forward to the future with this cheeky dude. Louise from Scissors and Comb

A LETTER TO MY SUFFERING (an extract)
by Madeleine McKenzie Y12 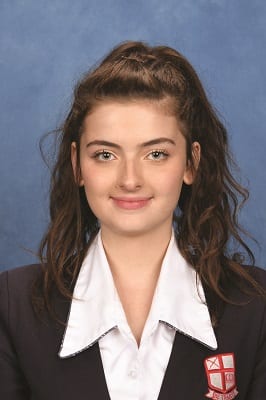 I met you when I was just thirteen. Perched onto the edge of my bathtub, my bare toes curled into the bathmat like claws, clinging to the ground beneath me. Eyes red and puffy, my throat swelled as your grip tightened.
Our meetings from then on were brief and sporadic.
For a while, your hold on me was weak.
The occasional tightening around my throat the only reminder of your presence.
Back then, a shake of the shoulders would do, and you were gone.
We were reunited at fourteen.
A speech in class or an important test turned into social gatherings or loud music.
We began seeing a lot of each other then.
You liked to crawl into bed with me.
You told me about everything that was wrong in the world.
Reminding me of the darkness that could so easily swallow me whole.
When I was fifteen you visited, a lot.
Like an uninvited house guest, you loitered.
Drifting through the hallways of my home, you waited.
Waited for me to ask a question in class, miss a deadline, or stand in a crowd.
That was your chance, your opportunity to take hold.
What started as take-offs in airplanes and speaking in assemblies,
spiralled into existing. Breathing, waking up, making breakfast, sleeping.
You had to be involved in all these tasks.
My reflection revealed you peering over my shoulder, your breath hot on my neck.
You were a thief.
As your venom coursed through my body, you robbed me blindly.
You made me hesitant, petrified.
You made me stand back in the crowd for fear of standing out.
You were crippling, and I didn’t yet understand the complexity of our relationship. 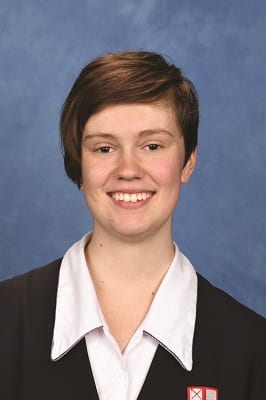 He was the cold front that follows a summer’s day, providing welcome relief from the suffocating heat. I looked forward to his arrival every day, longing for the cool breeze that blew in when he opened the door.

But cold fronts are dangerous. They bring with them the threat of rain and storms; of jagged lightning smirks and thunder voices, gale force winds slamming doors shut and raindrops falling from red-rimmed eyes.

He was the eye of the hurricane, untouched by the destruction he caused around him. But no matter how hard I tried, I could never reach him, perpetually trapped on the edges of the storm, beaten and battered as I struggled to find the calm centre.

But I loved him. He loved me. I told myself that the least I could do was brave the storm to see the sunshine on the other side. And I tried – God help me I tried. But this time it was worse. This time the wind howled like wolves and tree branches battered windows like hammers, breaking the glass. This time I was knocked off my feet and left lying on the ground, blood flowing from my nose as his fists flew like hail stones above me.

This time I was scared. I lay still and waited for the storm to pass; for his breathing to calm and his hands to still. Looking in the eyes that once held captivating whirl-pools, I spoke with red-stained teeth, “Goodbye.”

As I closed the door behind him, I knew that it was not over. He would be back. But I had no choice, so I drew my blinds and tried to wait for him to forget about me and move on.

At first, he was sweet, trying to lure me back to him with voicemails filled with promises of change and declarations of love. My fingers itched to pick up the phone – but I didn’t. And he got mad. 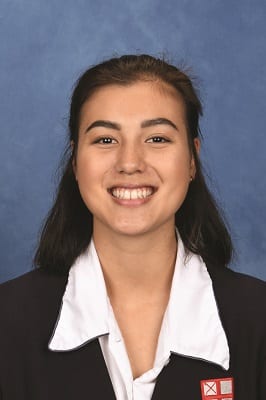 Brandon remembered the day the war started. The simple days in the playground when he was eight years old. Days he spent moulding littered sand, feeling it crunch underneath his bitten nails. Days always alone, his still developing brain chasing his thoughts in an endless game of tag. He remembered hearing the whispered concerns of his parents and teachers, the sympathy coating his teacher’s voice. His mother’s eyes were a frozen lake, delicate yet glazed so Brandon could not see what lurked behind them. He knew his mother wasn’t present in that moment, a veteran herself. His father merely stared sternly at his teacher, eyebrows knitted together as his teacher spoke, “War always affects the children the most.”

Every day Brandon would come home, the weight of the war crushing him until tears sprang from his eyes. His father would glare at him as he sobbed, always afraid to die but afraid to live.

“Man up,” he would grunt. “Only women fight in the war.” In these moments Brandon would think of his mother. The tiny white scars adorned on her arms, the distant look on her face when she thought nobody was watching. She was lucky to survive the war, fighting in it for years. She was the strongest person Brandon knew, yet her frailty scared him. He couldn’t lose her.

Everybody had lost someone in the war. Three people at Brandon’s school had lost their lives. One, starved from the conditions of the war until she couldn’t take it anymore. Another died at the hands of chemical weapons; poisoned by her own medication. The third, lost in an air raid, the blast sending her off a cliff. They were all girls.

Only women fight in the war…

All of this, of course, didn’t matter. What mattered was the routine drudgery he had to face at school. Nothing had happened that day. He sat restlessly through class, trying not to think of the war. He almost didn’t notice when his teacher apprehensively slipped his marked test on his desk, the blood red mark of his failure glaring at him. Then it happened. The air strike.