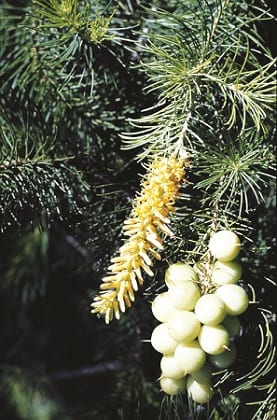 Geebungs or Persoonias are shrubs with small yellow flowers followed by edible fruit. There are various species, that can be found in the Sydney area, mostly on sandy soils, but a few also grow on clay and alluvial soils.

From the 12 species described in the Sydney area, two are endangered; one is poorly known and another one extinct.

The other species are more common and are an important part of the understory and shrub layer of woodlands. Once the fruit is ripe and turns purple in colour and can be difficult to find because native wildlife really enjoys the fruit.

Whether in flower or in fruit, Persoonias make a very attractive garden plant- but they are quite difficult to propagate.

Persoonia pinifolia is found growing in heath or sclerophyll forest in this area. It is commonly referred to as the Pine-leaved Geebung or The Australian Christmas Tree because it commences flowering around Christmas and has “pine-tree” like leaves.

With its fresh, green foliage it is attractive all year round and it bright yellow flowers never fail to attract attention. The species is hardy in most well drained soils in full sun or partial shade.