Extinction Of This Lion 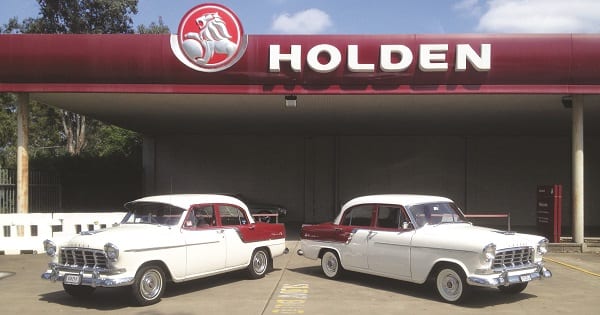 In December last the FE-FC Holden car Club of NSW made a visit to the Heartland Holden dealership for a photoshoot before the closure of the Holden division at Penrith as the signage and sales of the iconic Holden will disappear forever.

In excess of 24 FE and FC model cars were present on the day, two sister cars in original Maroon and Ivory colours fitted with the Holden corporate livery. This beautifully restored car on the left belongs to Steve Rhind of Dapto and the car on the right belongs to Vern Sotter of Galston. The photoshoot was over several days allowing for Torana, FJ Club and Monaro Clubs along with most other models to make an appearance.

The FC Holden was produced in Australia 1958 and 1959. When Holden had 52% of the Australian car market, meaning 1 in every 2 cars sold was a Holden. It was the second highest selling model for Holden between 1948 and 1968 and was only out-sold by the fabulous EH mode it is sad that the lion with his paw on the globe of the world will disappear from our buildings, but he lives on in our hearts and on these fabulous cars both privately and in museums.