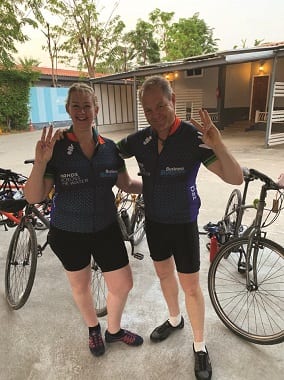 DARREN AND JULIA, the owners of Elude Escape Rooms situated in Galston, have just returned to Sydney after completing a 500km charity bike ride through Thailand.

They discovered the bike ride through their Business Blueprint group, one of Australia’s leading business education programs that has been actively supporting the charity Hands Across the Water for many years.

Hands Across the Water is a charity based in Australia, New Zealand and Thailand that was founded by former police forensic specialist Peter Baines to aid at-risk Thai children. Peter Baines started the charity after seeing with his own eyes the number of children that were left severely affected by the Boxing Day Tsunami that devastated Thailand in 2004. Hands Across the Water provides fundraisers with the opportunity to understand and experience first-hand the impact that their support has on Thai children and their communities.

The Elude team was able to raise an astonishing $10,000 for this great cause thanks to the support of friends, family and local businesses. All riders fund their own travelling and there are no administration fees resulting in 100% of donations reaching the orphanages. With funds raised the next step was to complete what they labelled as a gruelling yet extremely rewarding experience.

Their adventure started in the city of Pak Khat in the north-east and from there they rode alongside the awe-inspiring Mekong River, before heading west and venturing through some of Thailand’s more remote villages and communities. Some of their highlights of the ride included visiting the Bridge on the River Kwai, Hellfire Pass and Death Valley Railway. After 500km over five humid days with temperatures reaching over 46°, Darren and Julia, along with 63 other riders finished at Duang Prateep, one of seven orphanages supported by the charity. There they were welcomed and celebrated by the children who’s lives would be impacted by this amazing journey. The total raised was almost $400,000.