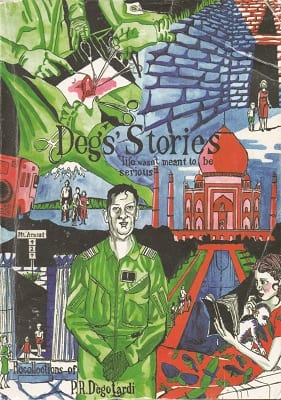 Doctors Peter and Lynette Degotardi were the first residential Doctors to live in Dural. This is one of their stories as told in a book Peter wrote, called” Life was not meant to be serious “ Only 100 copies were published , so it is very hard to find. When Peter and Lynette were at Uni. they were known as Big and Little! This story gives a good picture of Dural as it was 60 years ago, and is told with the permission of their son, Steven

We had begun the Dural practice in mid 1957, when we were both working as Resident Medical officers at Parramatta District Hospital. The system we worked was that of running evening surgeries, from eight pm, and on Saturday mornings. If we were both off from the hospital, we both came home, but we worked the roster so one of us was at Dural each night. It was a fairly hectic life, but it was all new, and we enjoyed every minute of it By August, the practice had built up to the extent that it was a viable source of income, so I gave in my notice and spent every day at Dural. Lynette came and went, keeping up her job at Parramatta, to ensure that we had an income at least.

We had bought an old chook farm at the junction of Galston and Old Northern roads, in the centre of old Dural. The old lady selling the property could not see it as anything but a producing poultry farm. “We don’t want the chooks”, we kept saying.” Sell them, we are going to practice medicine.” She was adamant.

Eventually we bought it- twenty three acres, a fibro two bedroom home with garage, and three thousand chooks with lots of chook sheds, for six thousand pounds. On the day we in, the chook man came, took all the chooks and gave us five hundred pounds.

We enclosed the front verandah, one end as a waiting room, the other as consulting room, and opened for business. It built up very rapidly.

The old home had an old pan system toilet in the back yard. There being no night soil service in the Dural District, I would dig a hole and bury this. Since I did not feel it was quite the thing to have the new local doctor seen carrying out this activity, it was always done at midnight.

Needless to say, the first money we earned was spent on installing a septic tank and inside toilet.

The Annual General Meeting of the Dural and Districts Historical Society will be held on Saturday, 14th October, at 2pm . Members will “Show and Tell” some of their historical treasures. All welcome.