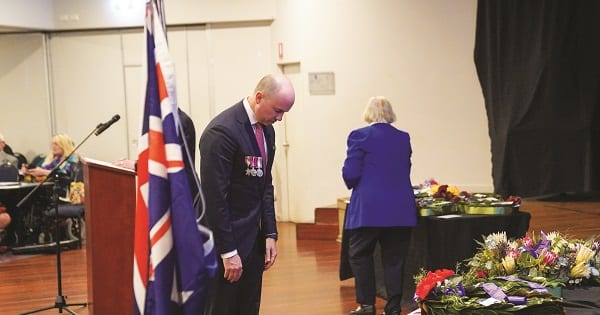 106 years on from the landing at Anzac Cove, we remember that morning when Australian soldiers waited in small boats on a darkened sea, awaiting the call to battle.

One of our own – a Hornsby man, Private Len Smith, recorded in his diary the events he witnessed on the 25th of April 1915 as a member of the 1st Australian Field Ambulance. He wrote,

History records our soldiers were the very definition of courage under fire, establishing a tenuous foothold on the steep slopes above the beach. 860 Australians lost their lives in the first five days of the Gallipoli campaign. We remember them all.

We remember Charles and Godfrey Fuller, the sons of Edward and Sara Ann Fuller, of Galston Road in Dural. Charles was two years older than Godfrey and both were clerks, they were popular young men with prospects when they answered their country’s call. Sergeant Godfrey Fuller, of the 4th Infantry Battalion, was killed in action on the 27th of May 1915. He was just 20 years old.

Just three months later, his big brother, Private Charles Fuller of the 17th Battalion, died of wounds he sustained at Suvla Bay. He has no known grave; his final resting place known only unto God. The names of Charles and Godfrey Fuller, and the names of all those this District lost in War, are inscribed on the Galston War Memorial.

Their service and their sacrifice are inscribed on our hearts. It was at Gallipoli that those untried men from the streets of Sydney came to know themselves as Anzacs. Australia came to know the Anzacs as men who fought with intensity and courage on the ridges, bluffs, valleys and trenches of the Gallipoli peninsula.

Our nation watched in awe as the Anzacs forged themselves into one of the most formidable fighting forces in the war on the Western Front.

They helped turned the tide of battle and bring the war to an end. Through it all, they came to embody something we called the Anzac spirit: of generosity, honour and courage; of selflessness, humour and mateship.

Mothers and Fathers lost their sons.
Wives became widows and children became orphans.
Holes were torn in families that time could never heal.
Many of those who came back from the war were wounded in body and mind.
We honour them this ANZAC Day.
We honour the troops from New Zealand, Britain and France and all the citizens of Empire who fought side by side with Australians through the eight long months of the Gallipoli campaign .

We honour the nurses, the stretcher-bearers, the chaplains and medics who laboured in terrible conditions to rescue, to comfort and to heal.

We honour the heirs to the Anzac tradition – all the Australian Defence Force personnel deployed to operations overseas and within Australia to protect our country and advance our interests.

In 1916, on the first anniversary of the landing, commemoration began of what was already becoming known as Anzac Day. It grew into one of the cornerstones of our national life; when Australians unite in faithful memory.

It is the day we remember all those who have given their lives in the service of our country, through two world wars, in conflicts from Korea to Malaya and Borneo, from Vietnam to Iraq and Afghanistan; in peacemaking and peacekeeping.

Together we say, with pride, sorrow and sincerity:
We Will Remember Them.