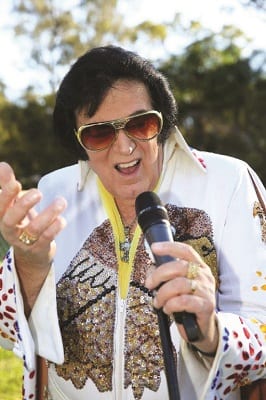 The Elvis experience started for Norm Bakker some 25 years ago when a sound engineer heard Norm sing at a major Sydney venue and suggested that maybe he should do an Elvis show. Norm is playing at The Galston Club on Saturday 15th December

So started the birth of a new production show called, a solid rock salute to Elvis.

The show has taken norm to many places overseas, and he has appeared on TV and radio.

Norm doesn’t try to be Elvis; his warm generous personality and sincerity to his audience makes this show stand out from others, and as norm says: “There is only one elvis, and in our lifetime there will be no other like him”.

Elvis presley’s biggest fan, norm bakker adorned in fabulous costumes of splendour bringing the king of rock ‘n’ roll back to life performing his ultimate Tribute “a solid rock salute to elvis” and singing all his biggest hits!