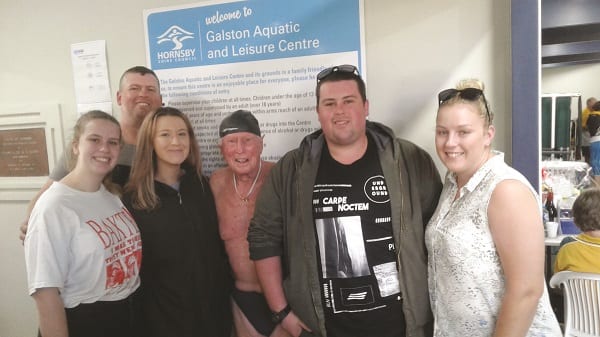 Last month we told you about James Short attempting to swim a 1500 metre freestyle at the Hills Masters Long Distance Swim meet at Galston Aquatic Centre. Well he did it!

Jim only joined masters swimming last year (Bushrangers Masters Club) specifically to set the record in the previous age group. Now he is going on to bigger and better things. Jim says “Everyone is so nice!” at Masters Swimming. Jim relishes the opportunity to swim at meets like the Hills Masters Club conducted on 6 May at Galston. He stated after his record swim “I would like to thank all the officials who make these carnivals possible. They not only make it enjoyable but also healthy for everyone. And you can quote me on that!”

Thank for your thanks Jim. We loved having you there and your support crew of five great grandchildren who are very proud of their great grandfather and admit that they have a hard act to follow.

There were over 70 swimmers from all over NSW and ACT at the Hills Long Distance meet and ten other amazing swimmers broke 7 National and 18 State records (provisionally). But it is not just about the records – as Jim Short stated, it is all the other swimmers who do it for their health’s sake resulting from the fun, fitness and friendship that Masters Swimming brings. The meet would not have been possible without the assistance of all the volunteers – members, visiting officials, Galston Swim Club plus Galston Aquatic Centre Management and staff and our wonderful sponsors, Glenorie RSL Club plus the four Woolworths stores in our area, Cherrybrook, Dural, Glenorie and Kellyville. What an individual and corporate team!

If you are interested in becoming part of this swimming fraternity you can join a local club, not necessarily to compete, contact Di at Hills Masters on 0418 432 587.