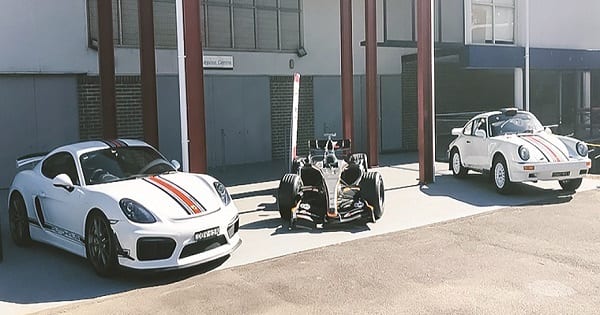 Pacific Hills Christian School at Dural has hosted a display of motorsport cars with a combined value of over $23,000,000! The trio included a McLaren Formula One MP4 car driven by Kimi Raikkonen, a Porsche GT4 and a Porsche 911 rally car. The MP4 is a gift presented to the Re-Engineering Australia Foundation by the McLaren team. The two Porsches were provided by School parent, Grant Geelan. Grant has a Porsche workshop called Autohaus Hamilton and is a sponsor of the School’s champion team which recently won the NSW Finals of the F1 in schools STEM Challenge, operated by REA Foundation. The occasion was the Year 6 STEM Day in which students were involved in the Jaguar Primary School Challenge also run by the REA Foundation. This competition involved making and decorating a balsa racing car and racing it on a track with Formula One-style start lights and computer timing.

Twenty-five teams competed against each other with Ube Bros recording the fastest track time of 1.599 seconds.

Special guests were Dr Michael Myers OAM, an engineer who established the Re Engineering Australia Foundation and who has spent over two decades inspiring young students in STEM, and former racing driver Adam Leung, who was the 2009 Formula Ford Rookie of The Year and 2010 Formula Ford National Champion.