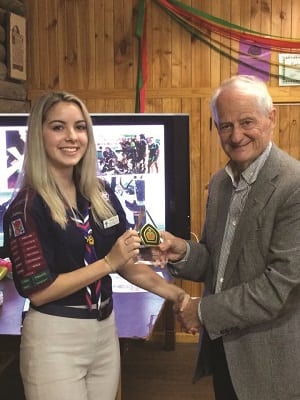 1st Dural Scout Group recently held its their Annual Reporting night and at the conclusion it was announced that they had three new Queen’s Scouts. The Queen’s Scout Award aims to widen the interests and knowledge of Venturer Scouts and encourage them to ‘look wide’. To achieve this prestigious award a Venturer Scout must be able to set a goal; plan progress towards that goal; organise him or herself and others; and maintain the determination to overcome difficulties and complete the task.

The Queen’s Scout Award is the highest award in the Venturer Scout section and carries an outstanding reputation within Scouting and the Community world-wide.

Lucy, Amy and Chloe were announced as recipients of the Queen’s Scout award by the Regional Commissioner for Venturer Scouts. Each year only a few Venturer Scouts achieve this prestigious award, which is presented by the Governor and Chief Scout of New South Wales, as a representative of the Queen, at Government House. Lucy, Amy and Chloe will join the list of 37 Queen’s Scout recipients at 1st Dural since 1963.

After the announcement, the Mayor of Hornsby, the Hon. Philip Ruddock, addressed the Group and presented QS plaques to the new Queen’s Scouts.

1st Dural Group has vacancies for Girls and Boys from 6 to 18 yo. If you’re interested contact Lukas at [email protected]